The Serengeti Plain at Busch Gardens Tampa is an expansive habitat home to a number of African species including giraffe, rhinoceros, and zebra.

The Serengeti Plain is best viewed by riding the Serengeti Express or Skyride. Great views of the southern portion of the plain can be had from Edge of Africa, or by dining at the Serengeti Overlook Pub or Restaurant. You can also catch glimpses of the plain while riding Cobra’s Curse, Montu, or from the pathways in the Nairobi section of the park.

For an even closer look, including the chance to feed giraffes, guests can choose the upcharge Serengeti Safari.

The Serengeti Plain as we know it today traces its history back to before the park’s opening. Along with the Anheuser-Busch Brewery and accompanying 15-acre public park (which included much of the present-day Bird Gardens area), nearly 120 additional acres were to be set aside as a preserve for the company’s retired Clydesdale horses and other animals including deer, buffalo, zebras, and ostriches.

It would be several years later in the mid-1960s when it more officially became part of the park and was known as Wild Animal Kingdom at that time. A 1967 newspaper article described it as a habit with “numerous gazelle, sheep, goats, and antelope. Wildebeest, Eland, Gemsbok, Springbok, Cape Hartebeest, Nyala, Sitatunga, Beisa, Oryx, Uganda Kob, and Lady Gray’s Waterbuck, plus numerous related species also are present. The more commonly known animals such as giraffes, Arabian camels, zebras, rhinoceros, elephants, hippopotamus, cheetahs, lions, gorillas, and chimpanzees, plus flocks of African birds also make their homes in the Kingdom.” 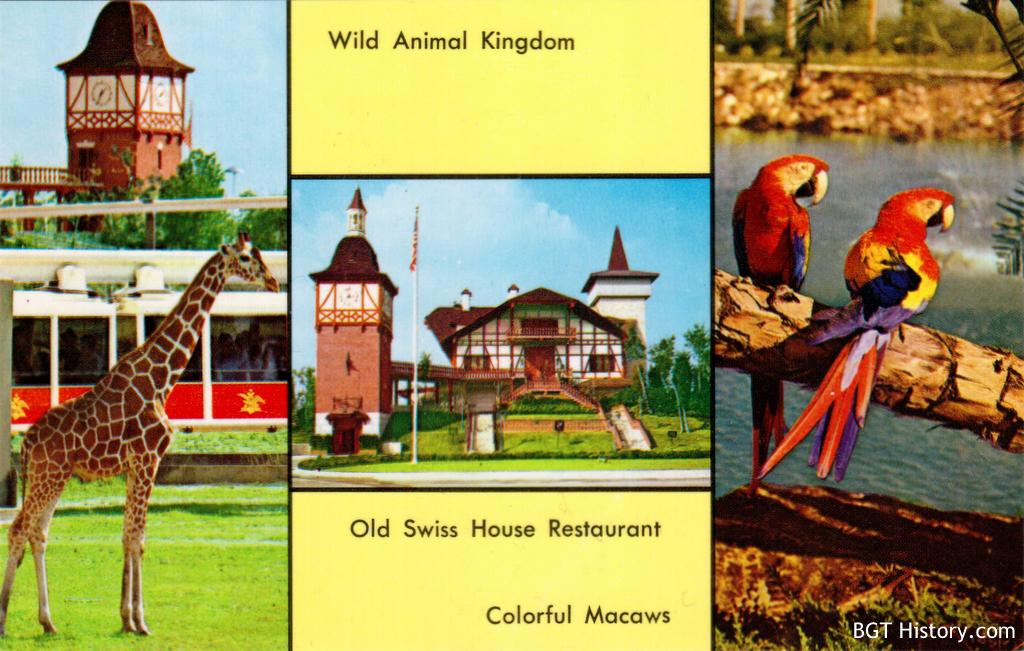 The article describes different areas of Wild Animal Kingdom including Gorilla Island along the “Congo River,” Goat Mountain, and “Lake Victoria” to name a few. The Skyrail (monorail) passed by many of these locations. The article also mentions the park was home to more than a dozen lions, including a pride of cubs recently born at Busch Gardens.

A 1974 map of the park names the area African Veldt, which also includes the Monorail Station, Veldt Theater, Old Swiss House, and Monorail Boutique gift shop. The park by that point was recognized as a “survival center” for many endangered species and was sanctioned by the USDA. The Trans-Veldt Railway provided tours of the Outer Veldt while the Monorail Safari provided tours of the Inner Veldt. Views of the northern end of the area could be had from the three-story Treetops stop on the railway.

Busch Gardens became the first zoo in the country to successfully hatch Marabou storks in 1978.

On November 1, 1999, the park announced enhancements were coming to the Serengeti Plain. Work was focused on the southern portion of the plain near Edge of Africa, including on a 21-acre plot making one seamless 29-acre area. The project aimed at creating a more dynamic habitat for the different species that called the area home, including the addition of rolling hills, elevated terrain, and seemingly barrier-free views. The Serengeti Express also received a realignment as part of the project.

From the press release:

Additions to the new environment include expansive berms, the largest of which is four acres; tiered and open landscapes covered with native and African grasses, scrub trees and shrubs; rock outcroppings and bluffs replicating natural formations; and naturalistic creek beds and mud banks. The Plain will feature nearly 700 trees including 26 species of Acacia, 7,000 shrubs such as Cape Honeysuckle and Burgandy Fringe Flower, and more than 21,000 short and tall grasses, Giant Reed and Red Fountain grasses included. A number of bamboos including Arrowleaf and Henon Timber also will cover the acreage. In total, more than 150 species of vegetation will be represented… In addition to landscape enhancements, a new behind-the-scenes 3,600 square-foot giraffe barn is being constructed and connected to a 10,000 square-foot habitat designed for additional animal care. The park is also constructing an off-view 6,000 square-foot hoofstock habitat.”

The engineer for the project was listed as Mark Rose, vice president of design engineering at Busch Gardens; architect was Peckham, Guyton, Albers and Viets, Inc.; landscape architect was Foster, Conant and Associates.

The announcement for the project came during a dedication for the new offsite Busch Animal Outpost located outside of Dade City in Pasco County. The 108-acre site featured 17 different habitats ranging in size from one-quarter to one acre in size for various animals. At the time of the dedication, about 50 animals were housed there including some who were temporarily relocated from the park while improvements were being made to the Serengeti Plain. The outpost, not accessible to the public, included a full-time resident curator living in a ranch style home on the property, along with zookeeper and veterinary staff with 24/7 coverage on-site.

The enhancements to the Serengeti Plain were dedicated on June 23, 2000, with a special ceremony. A golden spike was set into place on the Serengeti Express Railway by members of Riverdance: The Show who were performing at the park as part of a national tour.

A park blog post in March 2012 detailed the recent birth of three giraffes. A female giraffe named Tinsel was born the week prior to Christmas 2011. The second birth was female Cofi, which is Swahili for “born on Friday.” A third male calf was born to mother Celina, and Facebook users chose Madoa as his name, meaning “spots” in Swahili. The other choices were Kuvuka and Kubwa.

A 140-pound baby female white rhinoceros was born in the early morning hours on Tuesday, October 23, 2012, on the 26-acre white rhino habitat on the Serengeti Plain to mother Kisiri and father Tambo. It was the second calf born to Kisiri, and the seventh to Tambo. Kisiri, Tambo, and another female white rhino were airlifted from Kruger National Park in South Africa in 2001 through the efforts of the International Rhino Foundation (IRF), a non-profit organization dedicated to the protection of rhinos.

The rhino and mother joined others on the Serengeti Plain on November 1, 2012. A Facebook poll was used to allow fans to choose the new rhino’s name from these four options:

It was announced on November 8, 2012, that the winning name was Jasiri.

In 2013, three new species were introduced to the Serengeti over the course of several months – sable antelope, springbok, and Grant’s gazelle.

For Halloween 2014, Busch Gardens shared a video of Forest, a black rhinoceros, enjoying some special enrichment:

On September 18, 2015, the park announced Kisiri, an 18-year-old southern white rhinoceros, was expected to give birth to her third calf within a few weeks. Kisiri had two successful births prior at the park – Jasiri in 2012 and Zohari in 2010. Tambo, a male southern white rhino was the sire.

The park celebrated World Rhino Day the following day on September 19 near the Nairobi Train Station with an event tent. Crafts, trivia, rhino artifacts, and educational activities were offered. Guests could help create a large paper mache globe that was given to the rhinos as enrichment later in the day. At the time, the park was home to two species of rhinoceros.

Kisiri gave birth to a healthy female southern white rhinoceros on October 16, 2015. The park shared a video of the calf and mother a few days later:

Guests were allowed to choose the new rhino’s name through a Facebook poll. They chose Nyota (Knee-yotah) meaning “star.”

In March 2017, a baby Kudu was named Stewart in honor of new park president Stewart Clark.

On June 1, 2017, a permit was filed with the City of Tampa for a tree consultation. The permit was the first step in the process for the removal of protected trees, and the filing mentioned the purpose as “future expansion” of the park. Tampa has regulations protecting trees of a certain diameter. Protected trees include those with a trunk diameter of at least five inches. Even greater protections exist for “grand trees” with a trunk diameter of 34 inches or more, among other qualifications. For a grand tree to be removed in the city, it must be considered hazardous, pose a risk of structural damage, or prevent reasonable use of the land where that use can not be reasonably reconfigured to leave the tree standing.

City inspectors visited the area of the park pertaining to the permit application which was along the northern edge of the Serengeti Plain around the train tunnel and also included nearby animal holding pens. A total of nine grand trees and a number of other protected trees were noted in the report filed by the inspectors. At the time, there was no announcement on what the expansion in that area might be, with the park declining to share any details on the purpose of the permit application.

Patty, a female giraffe born just before St. Patrick’s Day 2018, joined the herd on the Serengeti Plain in July 2018.

A male giraffe was born to mother Bea on June 19, 2020, weighing in at 100 pounds and standing five feet tall.

The giraffe would later be named Beacan and made his debut on the plain towards the end of 2020. The park shared a short video update in early December.

Jody, the black rhinoceros living in the habitat between the north and south portions of the Serengeti Plain, received some special Independence Day themed enrichment just before the 4th of July in 2021.

Below is a list of some of the many animal births that occurred at the park of species on the Serengeti Plain over the years:

Some of the postcards through the years feature views of the plain and some of the wildlife that called the expansive habitat home:

Additional information and images on Serengeti Plain at Busch Gardens Tampa will be added in the future.