The “original” Busch Gardens, the Bird Gardens area is where it all began for the Tampa park with lush tropical gardens and exotic birds. Today, guests will still find a variety of gardens and birds throughout the area, along with newer additions like the Australian-themed Walkabout Way area. 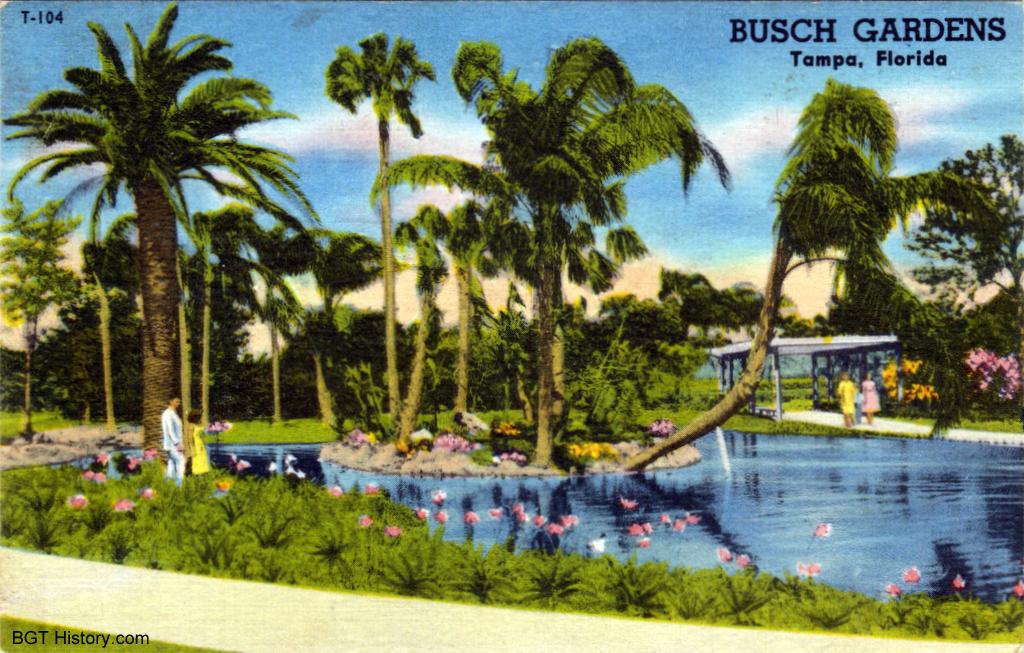 In addition to the botanical sights, Bird Gardens also has a variety of animal habitats, photo-ops, dining & shopping options. Beyond the year-round things to do in Bird Gardens, the area also serves as the entrance to the festival area and often becomes part of those events with temporary food, merchandise, and game booths.

(This section is a work in progress.)

A marker with the dedication was unveiled at the ceremony by Adolphus Busch IV, the great-grandson of the first president. Along with the names of past presidents in raised gold-leafed lettering on the large stone, the marker also featured the company’s intertwined eagle and ‘A’ logo carved from a solid piece of walnut by Jonathan Jones of St. Petersburg. It was housed in an open A-frame structure with handmade copper shingles.

The events of the day also included tours of the brewery & grounds, a luncheon, trained macaw demonstrations, and a major league exhibition ball game between the Anheuser-Busch owned St. Louis Cardinals and the Chicago White Sox at Al Lopez Field in Tampa.

Mills and Jones, a company from St. Petersburg, served as general contractor for the gardens project. The landscape architect was Charles R. Wedding, and he was assisted by James E. Hammond. Architect William B. Harvard designed the Hospitality House.

The new gardens encompassed 15 acres just to the southwest of the main brewery facility and the project was reported as a half-million-dollar investment. Some 1,400 exotic birds, many of them free-roaming, resided at the new park. That number included a pair of eagles representing the company’s trademark, over 200 members of the parrot family, 50 flamingos, 40 toucans, and 50 swans, ducks, and other waterfowl.

Busch Gardens Tampa opened to the public on June 1, 1959, with an estimated 1,600 guests attending. The first visitors, Mr. and Mrs. Herbert Metzel, were presented a ceramic planter with a replica of the company’s Clydesdale eight-horse hitch. Hours for the gardens at the park’s opening were listed as 10 a.m. to 6 p.m. daily, with tours of the brewery available from 9 a.m. to 5 p.m. on Tuesdays through Saturdays.

Outside of the brewery tour and free samples, the gardens were the main draw for many visitors to the park. Pathways, including a raised promenade, allowed guests to wander through the gardens and around three connected lagoons. Attractions in the first few years of the park’s existence included the Amphitheater with free shows featuring trained birds, the Adolphus Busch Space Frame (also known as the Geodesic Dome) which held some of the more rare birds, and Dwarf Village, which featured scenes from popular children’s tales in miniature. Other early animal displays were Devil’s Island and the flamingo habitat.

An aerial view of much of Bird Gardens from a late 1960s brochure including views of the Anheuser-Busch Brewery, Hospitality House, Geodesic Dome, Bird Gardens Theater, and Flamingo Island: 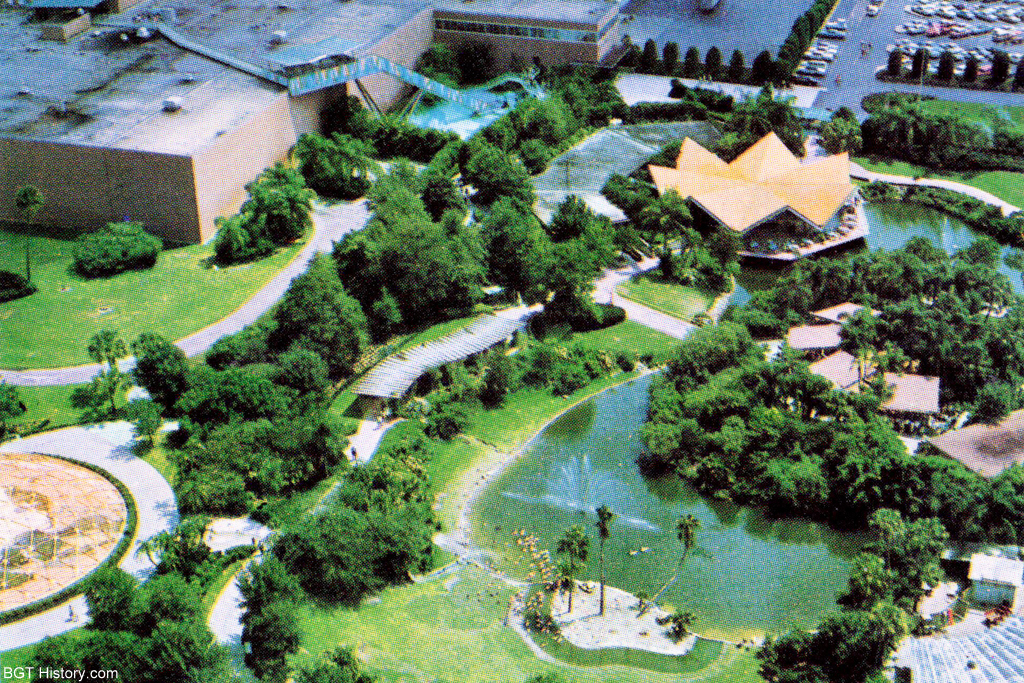 By 1977, it was reported there were some 2,500 exotic birds as part of the area, along with a bird show and a puppet show.

In more recent years, a number of special activities have occurred within the Bird Gardens area.

An all-new experience, an interactive Pumpkin Patch, debuted on the lawn between Xcursions and Walkabout Way on October 5, 2011. There was a children’s hay maze, various games, crafts, fall-themed photo ops, special appearances from Sesame Street characters The Count and Abby Cadabby, and the option to purchase and paint pumpkins to take home. The Pumpkin Patch was open daily and ran through November.

For Easter in 2012, a new experience was offered on the lawn outside Xcursions. An egg hunt was held five times daily, with every child receiving a gift for participating. There was also a craft station, photos with the Easter Bunny, and a Pick-a-Pop game. Participation in the egg hunt and craft station was $5, and a photo with the Easter Bunny was available for $10.

As of Summer 2012, there were two species of peafowl roaming around the area – Indian and Javan. There were four Indian peafowl – two white females, one white male, and one blue female. One of the white females “adopted” Javan peafowl chicks, who were born to their parents that resided in the Jungala section of the park.

In November 2012, two new topiaries went on display on the corner of the lake outside of Garden Gate Cafe – a Commerson dolphin representing SeaWorld and another representing turtles swimming around coral. (These were removed by Spring 2017.)

Easter festivities returned to the lawn outside Xcursions in 2013. From mid-March through Easter Day, March 31, guests could participate in an egg hunt, held each hour from 10 a.m. to 5 p.m. daily. There were also crafts, games, and a photo op with the Easter Bunny. Pricing remained the same as it was in 2012.

In late August 2015, the path between Flamingo Island and Kangaloom closed in order to be significantly widened. The Kookaburra’s Nest was closed during this work. Guests could still access Kangaloom from the opposite side coming from the Garden Gate area.

In early 2017, a new addition appeared in the small butterfly garden area along the path between Garden Gate Cafe and the flamingo habitat. A small frog topiary was installed, which looked like it was leaping forward to catch its next meal. Around the same time, the memorial bench for Pinky was moved from outside Jambo Junction to the small deck overlooking the flamingo habitat.

From April 14 to 21, 2019, the Easter Bunny was available for pictures at select times beginning at 11:30 a.m. daily on the deck overlooking the flamingo habitat.

Wendy’s visited the park on August 3, 2019, with free samples of their maple bacon frosty.

Postcards sold by the park in the early years most often featured the Anheuser-Busch Brewery, Hospitality House, and scenes from around the gardens.

Those gardens were filled with a variety of avian species, and close-up postcard images of some of the tropical birds were popular.

Additional details and images about Bird Gardens will be added in the future.