Park maps serve a practical purpose by helping guests navigate during their visit. They also make a great souvenir and give a glimpse into the past. The maps throughout the years are a snapshot of what attractions and other features the park offered at any given point in time. Check out the maps below to see how Busch Gardens Tampa has changed since it opened in 1959.

Click the image to view the map in higher resolution.

This undated map is part of a souvenir booklet from the first several years of the park’s existence.

This map highlights the addition of Boma, which according to the brochure was scheduled to open in June 1970. In comparison to the older map above, note the addition of the monorail and Swiss House on the right, and the Snack Bar (#21) out in the parking lot – better known today as Zagora Cafe.

The expansion of Busch Gardens continued in the early 1970s with the addition of Stanleyville and the train connecting it to the Boma area. 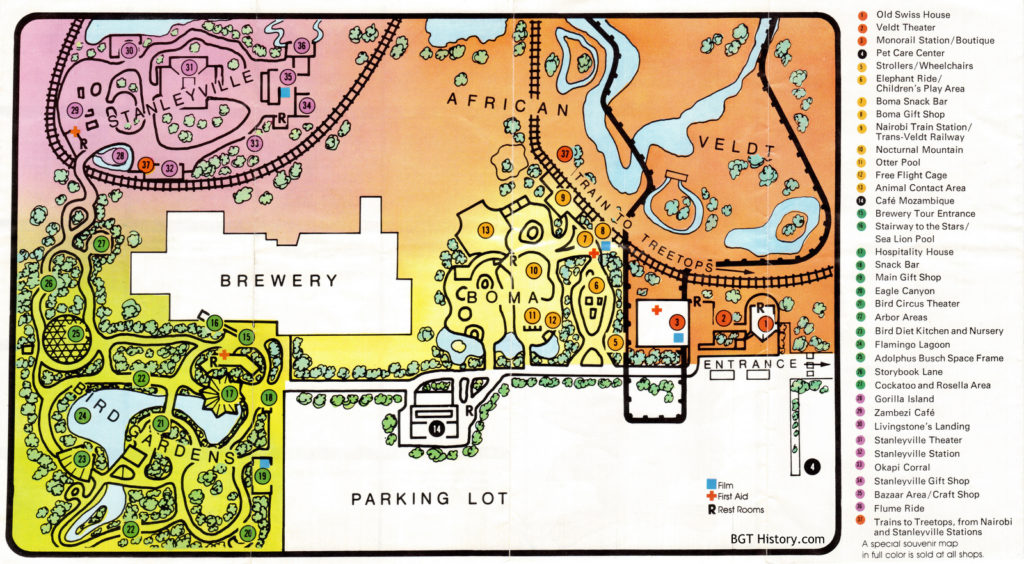 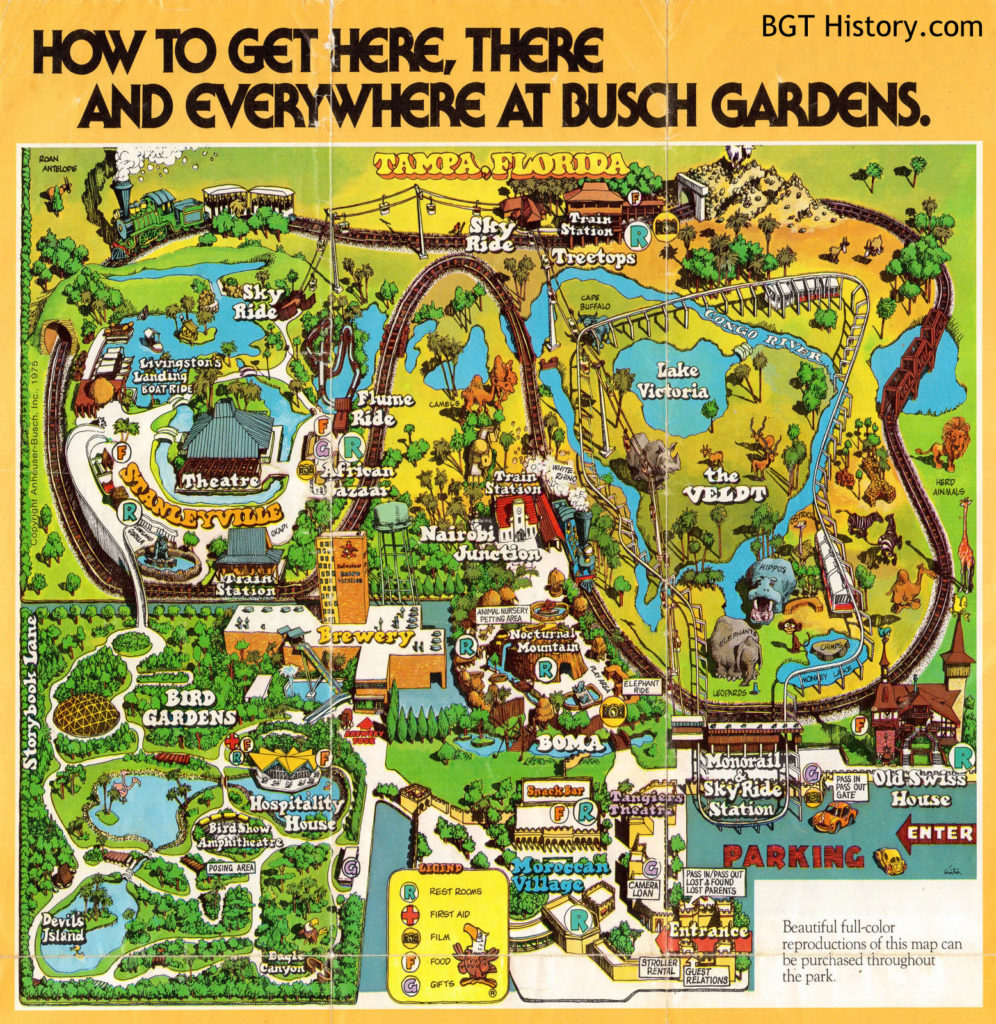 This map has the addition of Swinging Vines and Claw Island in Stanleyville. 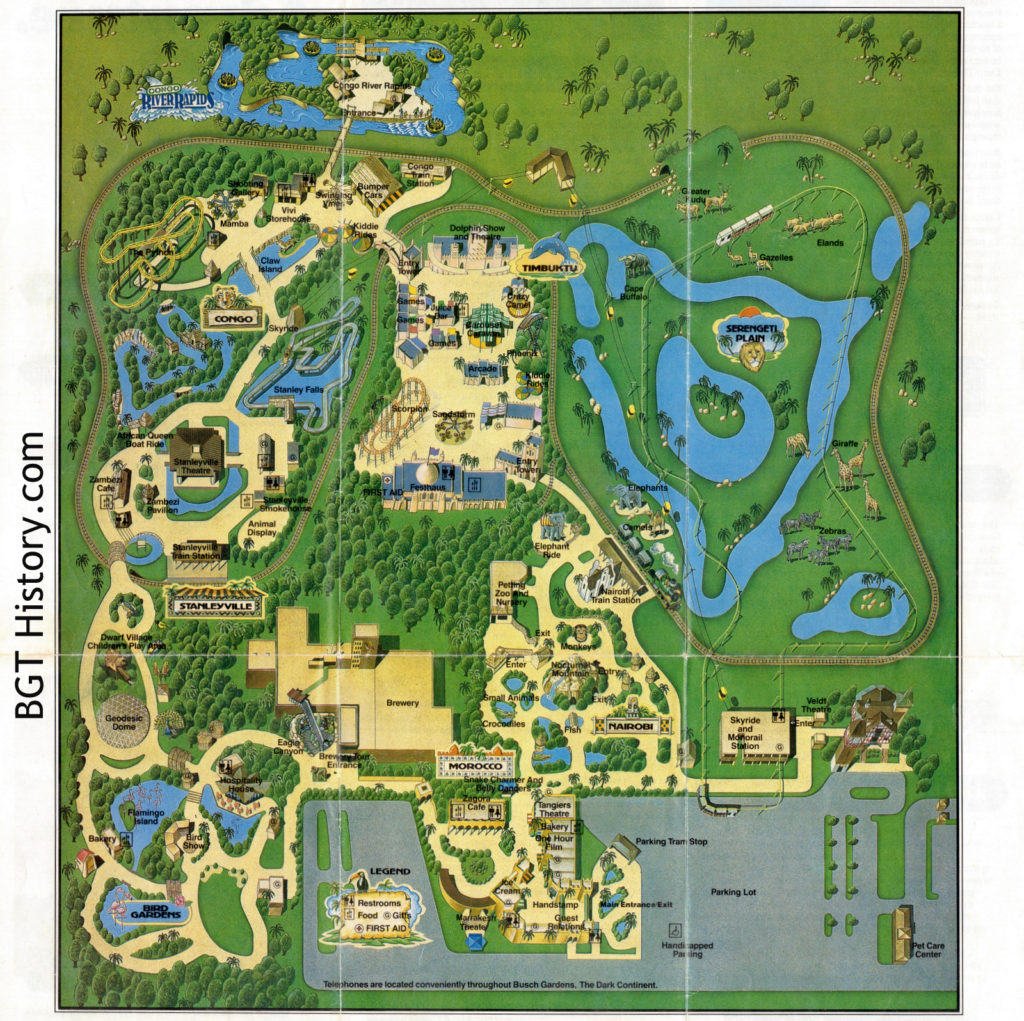 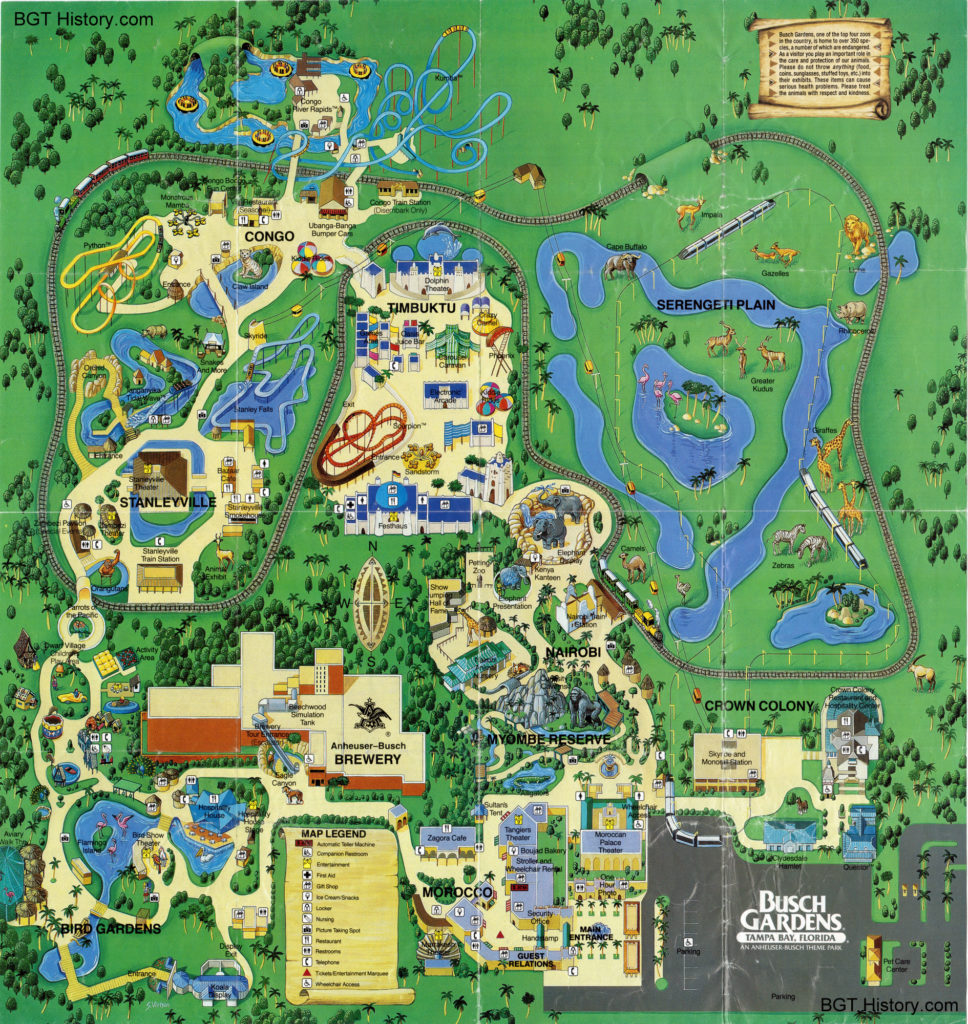 Special thanks to “Stingray” Tom for donating this map. 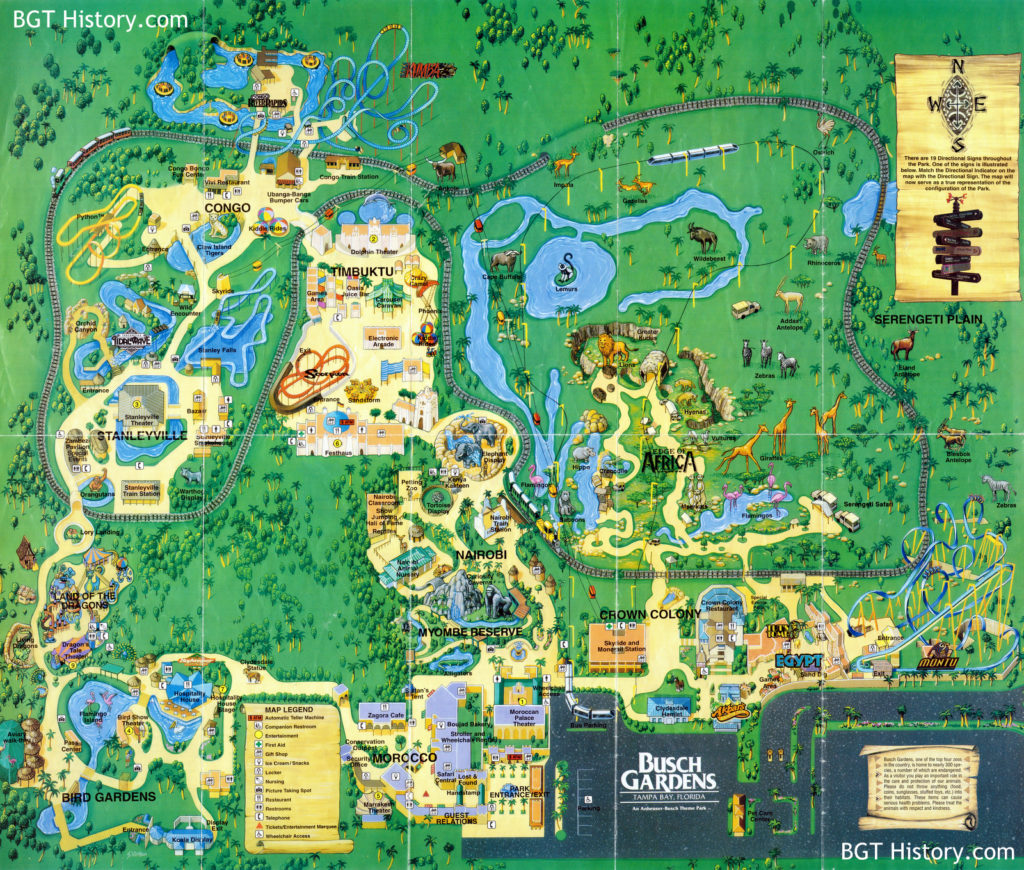 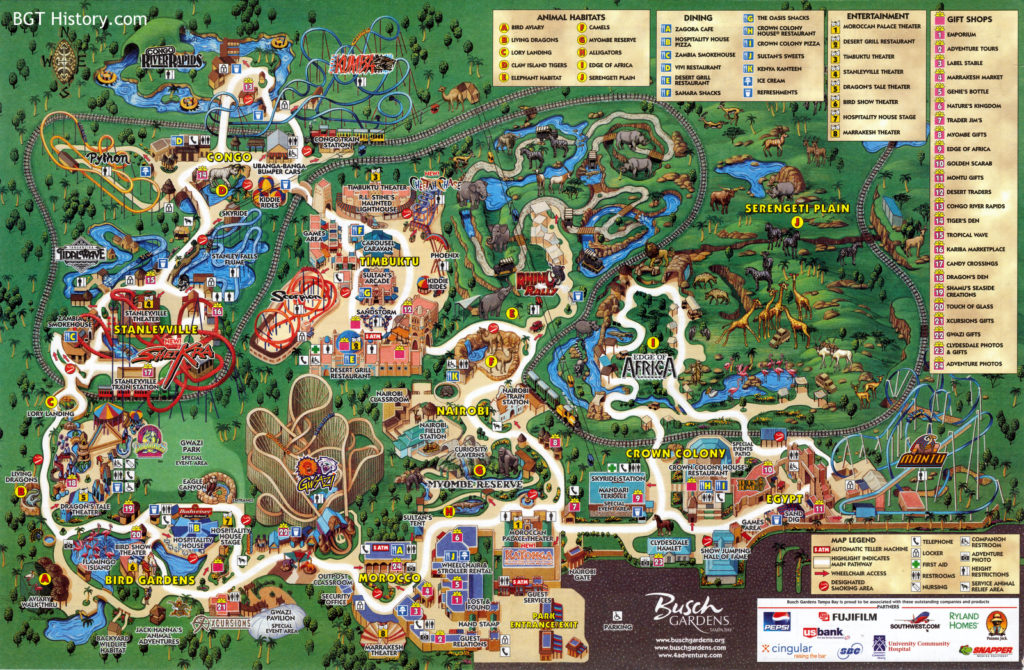 This map from 2007 shows the new Jungala area under construction, labeled as “Future Attraction.” 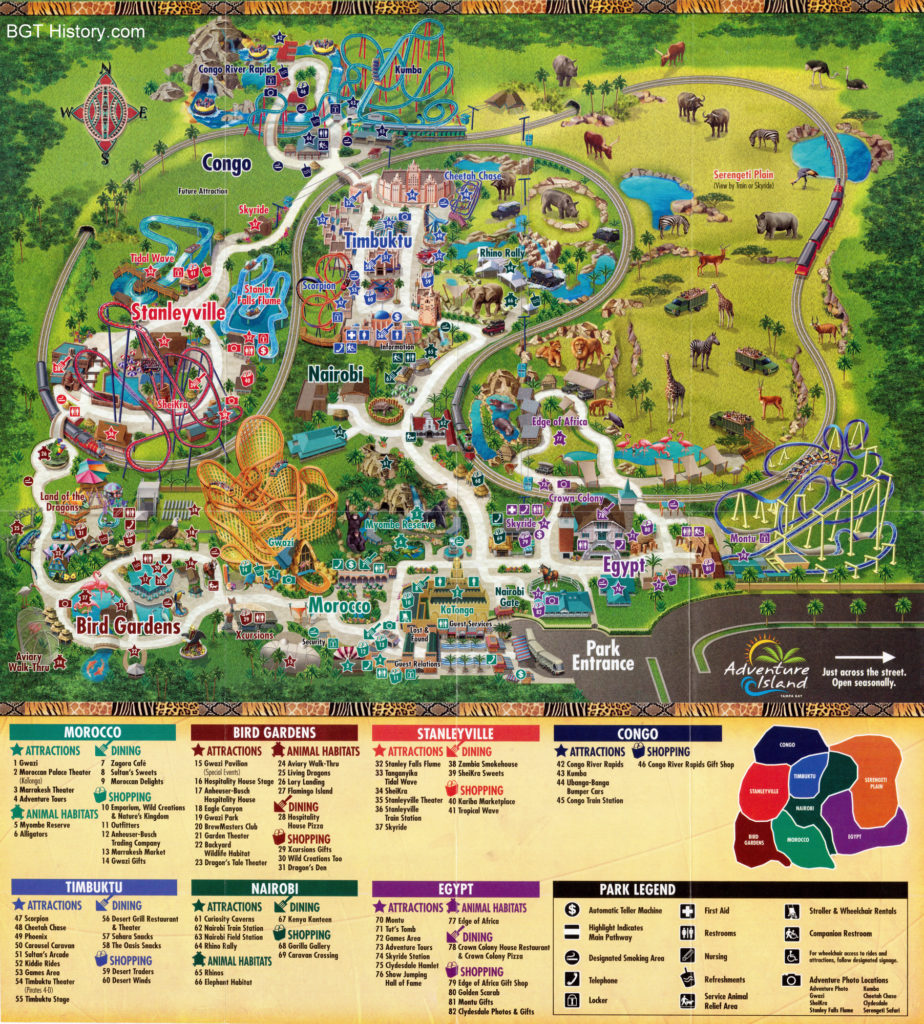 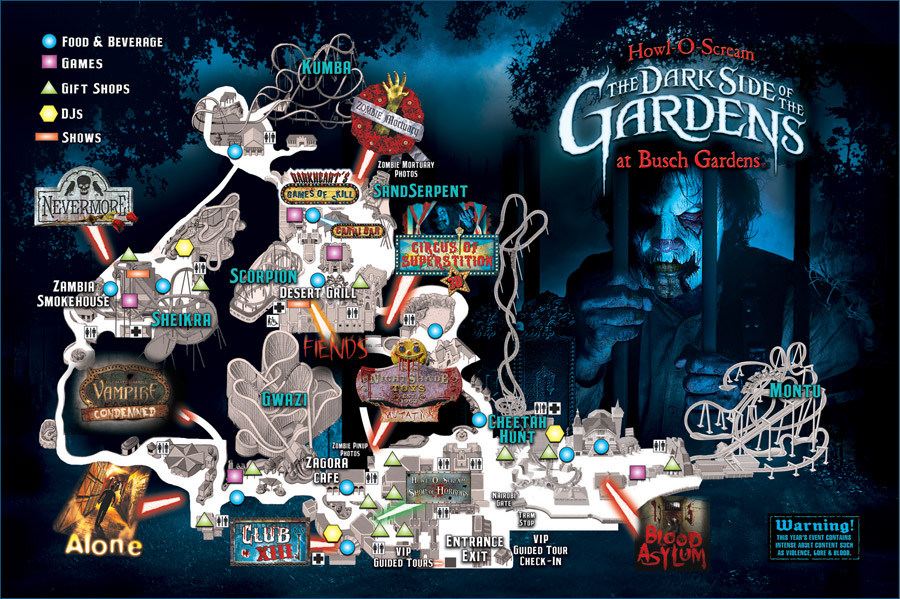 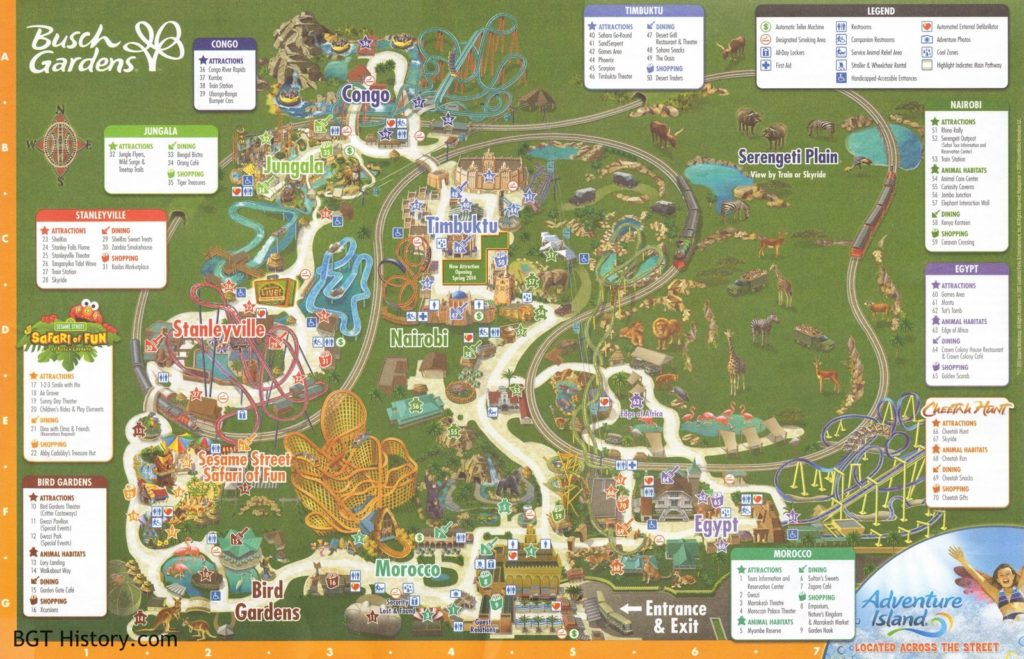 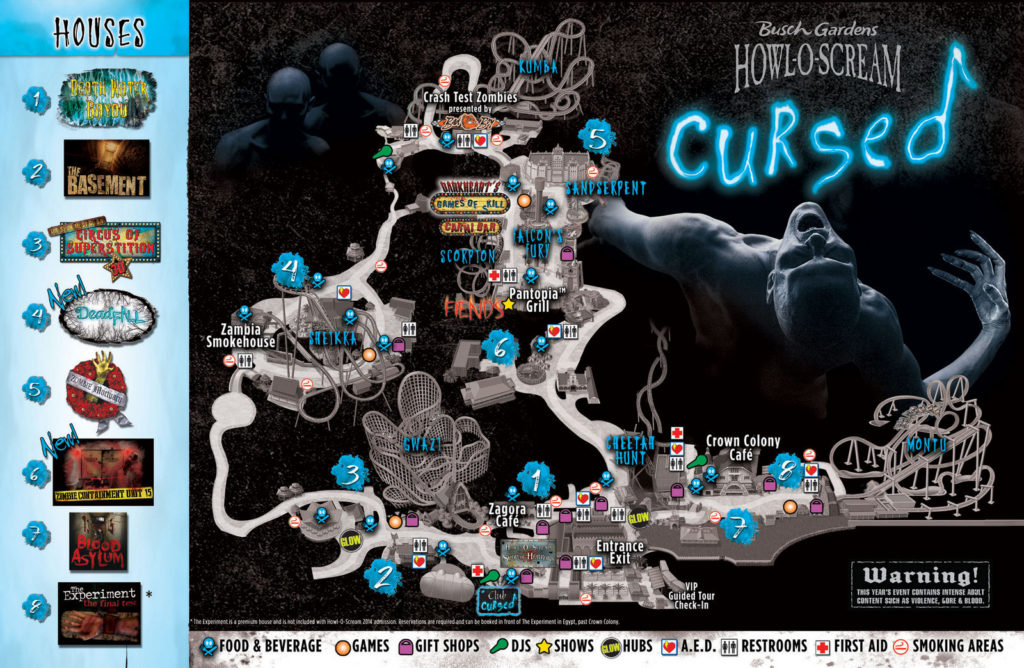 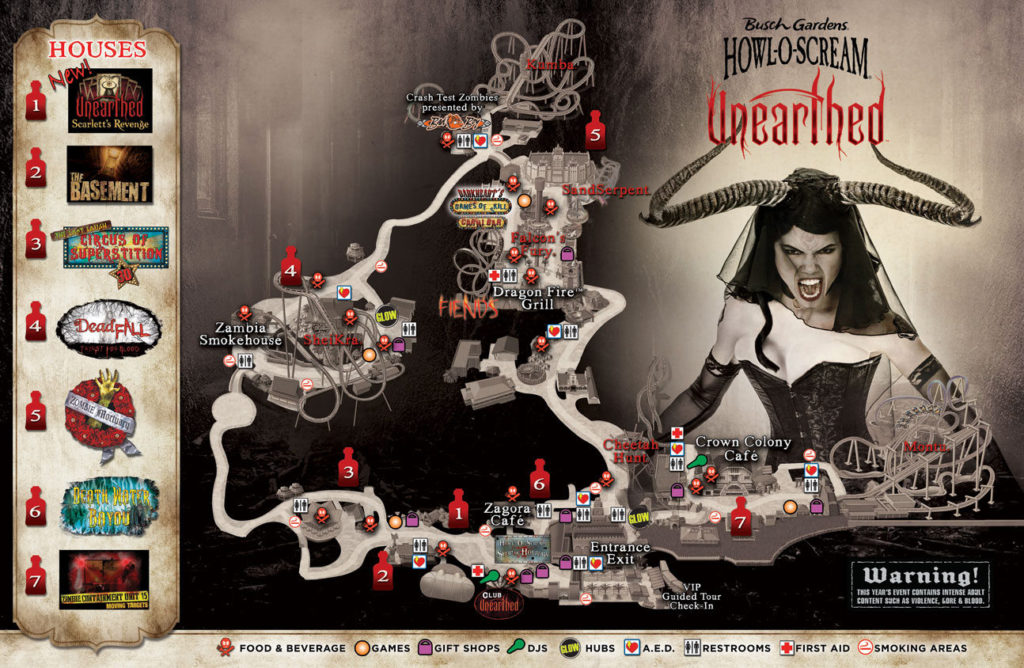 This map has the addition of Cobra’s Curse and the change of Crown Colony to Serengeti Overlook. 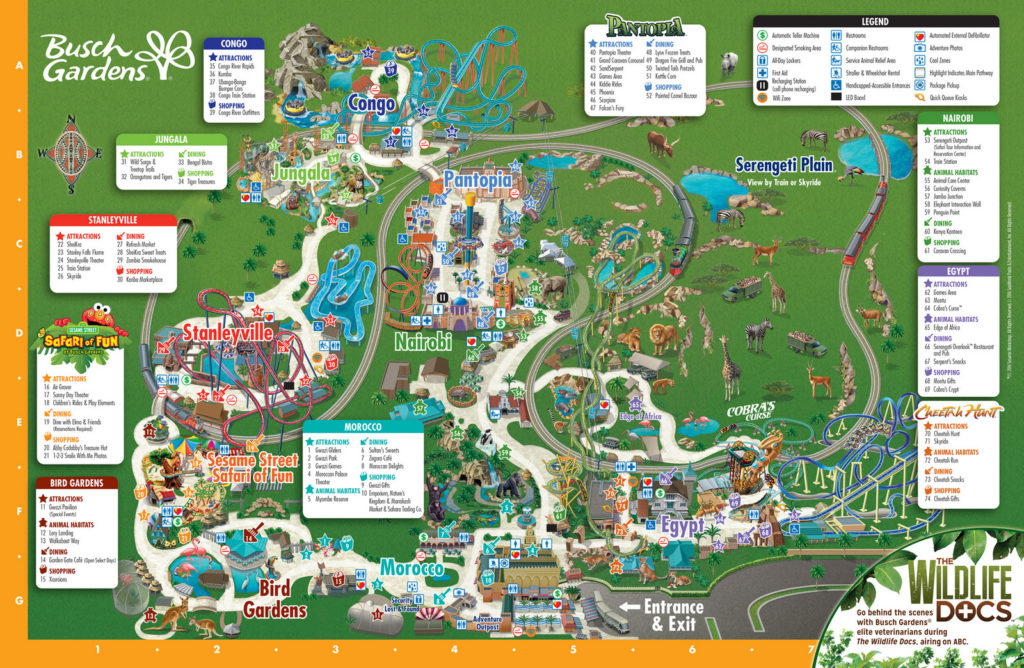 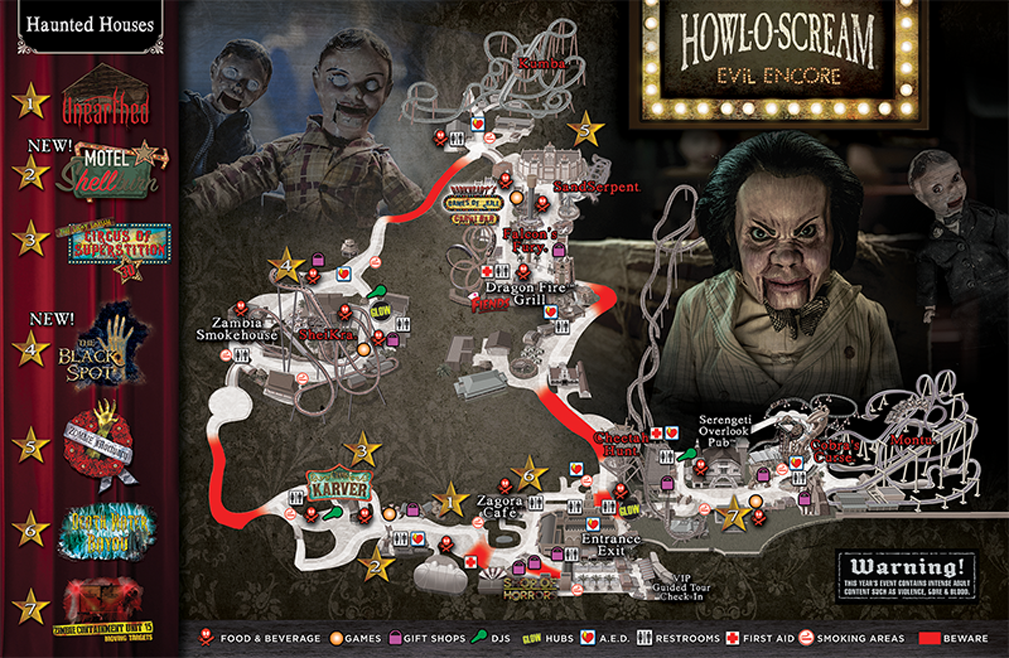 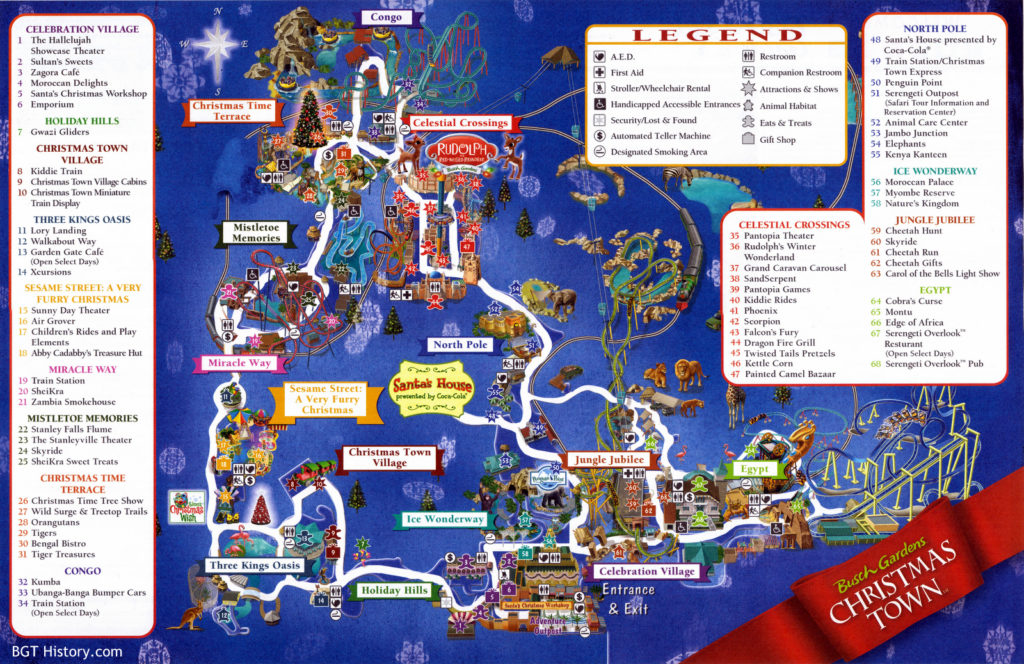 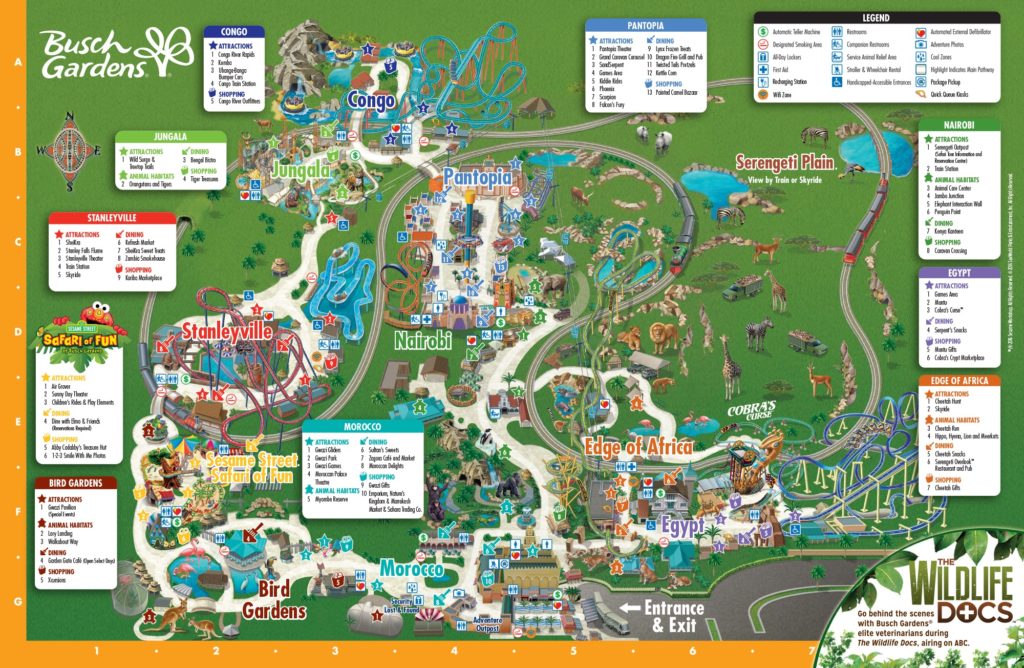 This version of the map used during the Food & Wine Festival shows Jambo Junction and Curiosity Caverns completely removed. It also features some minor design changes – the legend and area boxes now have sharp corners instead of rounded edges, and the seasonal advertisement in the lower right corner is now rectangular in shape instead of a semi-circle. 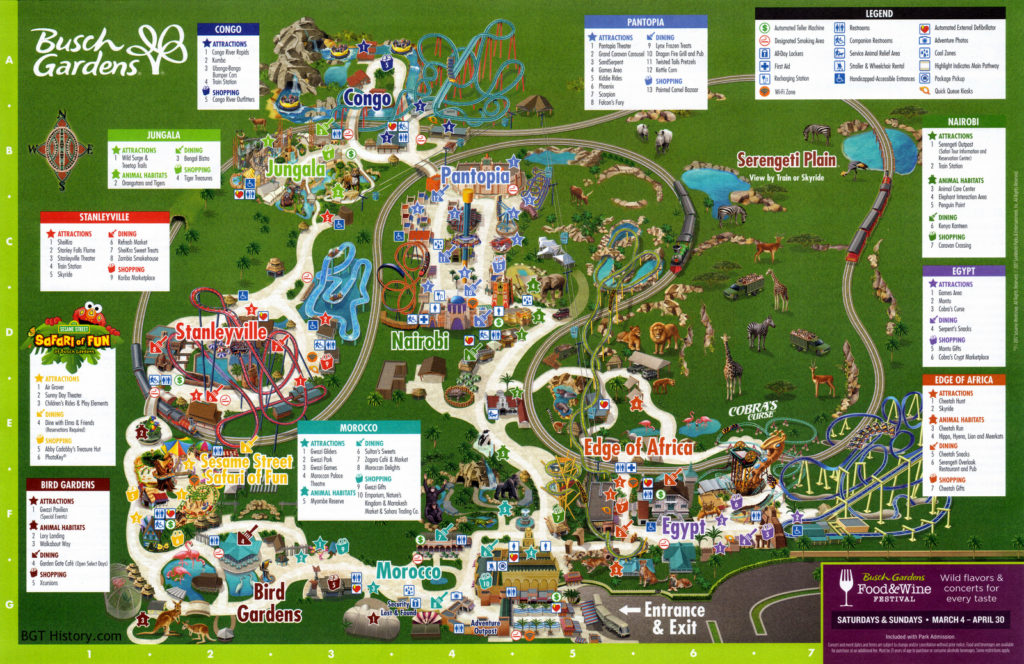 This version of the map includes the new Animal Connections logo over the former Jambo Junction area, and its listing under Nairobi as an official attraction once again. 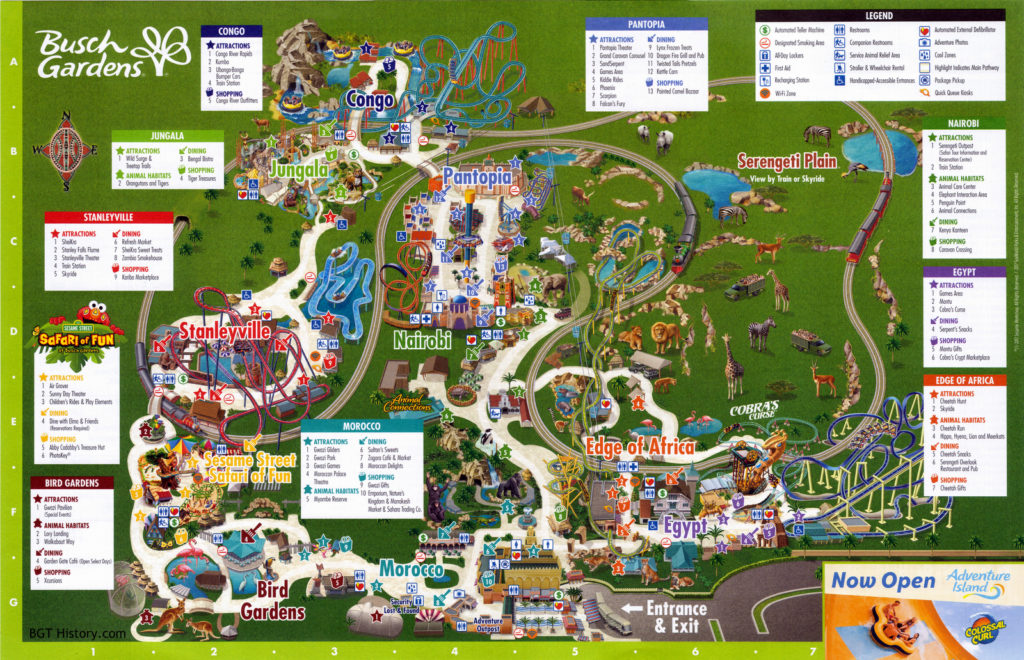 Debuting at the beginning of the month, this version of the map only has a couple of small changes. The Sesame Street Safari of Fun logo above the location listing box has changed, with Elmo being removed. Under the Stanleyville listings, SheiKra Sweet Treats is changed to SheiKra Eats. 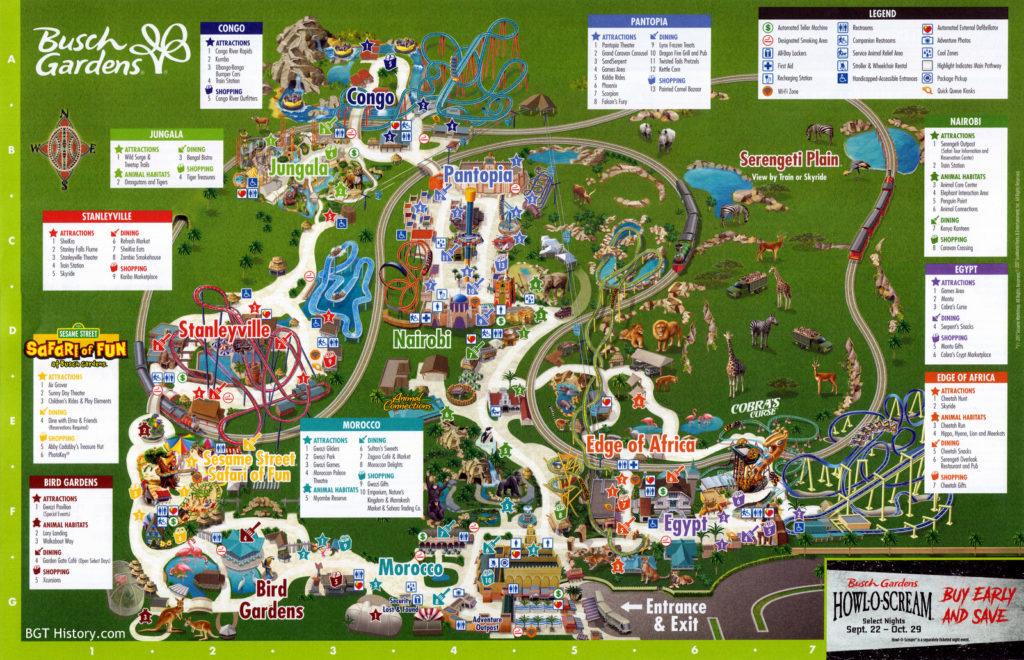 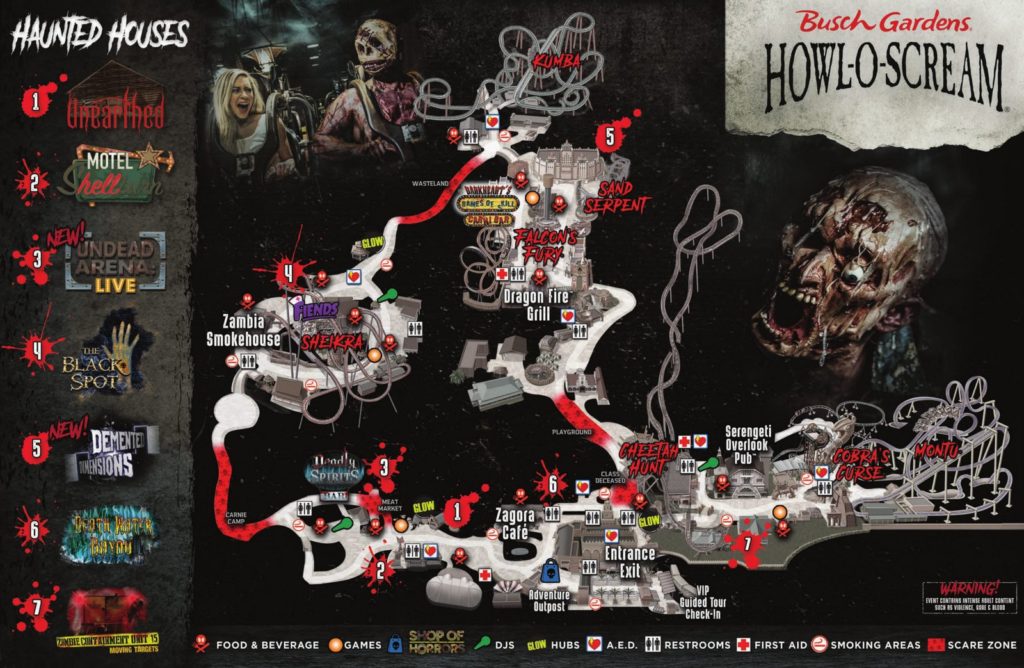 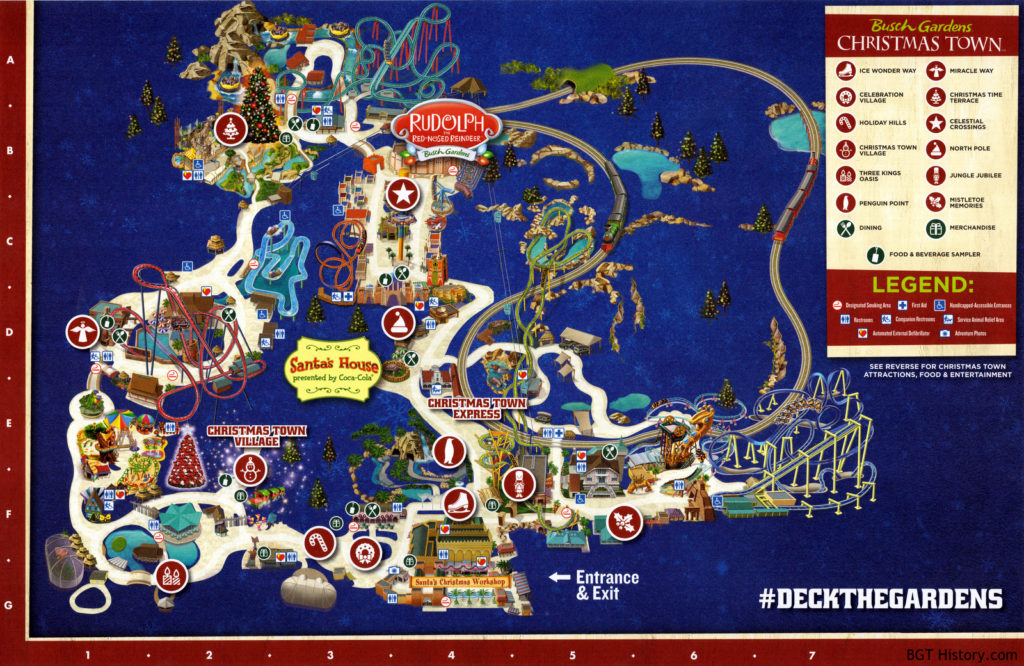 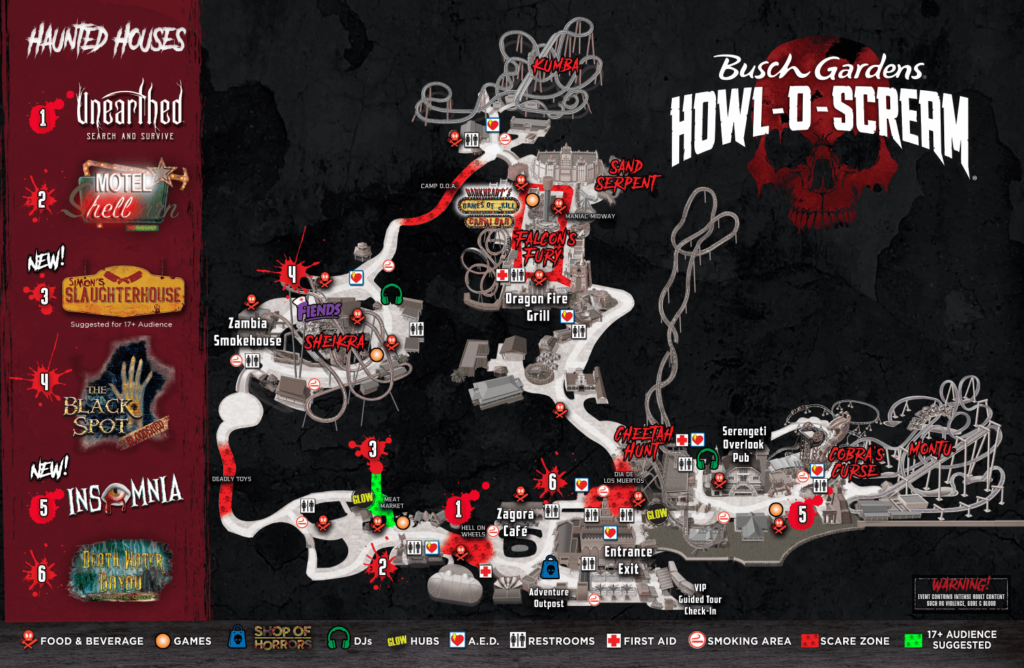 In late October 2018, the map underwent another redesign. Most of the major attractions received names over their location on the map, and instead of listings being broken up by area, they were broken down by type and placed on the right side. In addition to the design changes on the front of the map, the back of the map also received a major change. The printed park hours and showtime guide were removed entirely, instead began being printed on a separate sheet of paper available on the map stands at the main entrance. 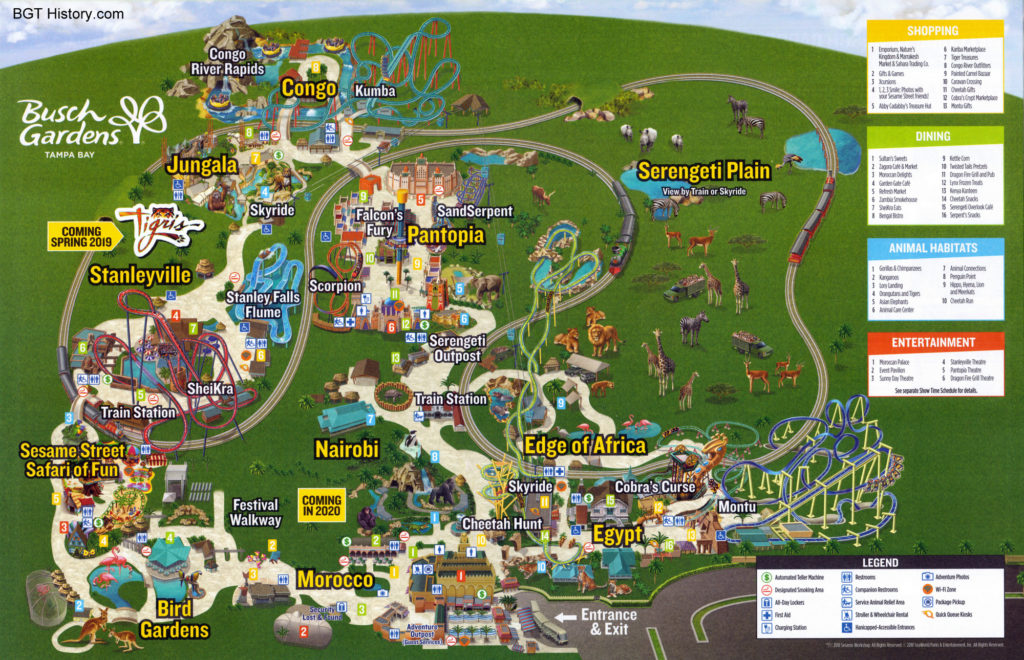 A minor change was made to the map to overlay the Santa’s House and Rudolph & Friends logos for Christmas Town 2018. These small changes along with in-park signage were used for Christmas Town instead of a specially printed park map as had been the case in previous years. See the back of this map by clicking here. 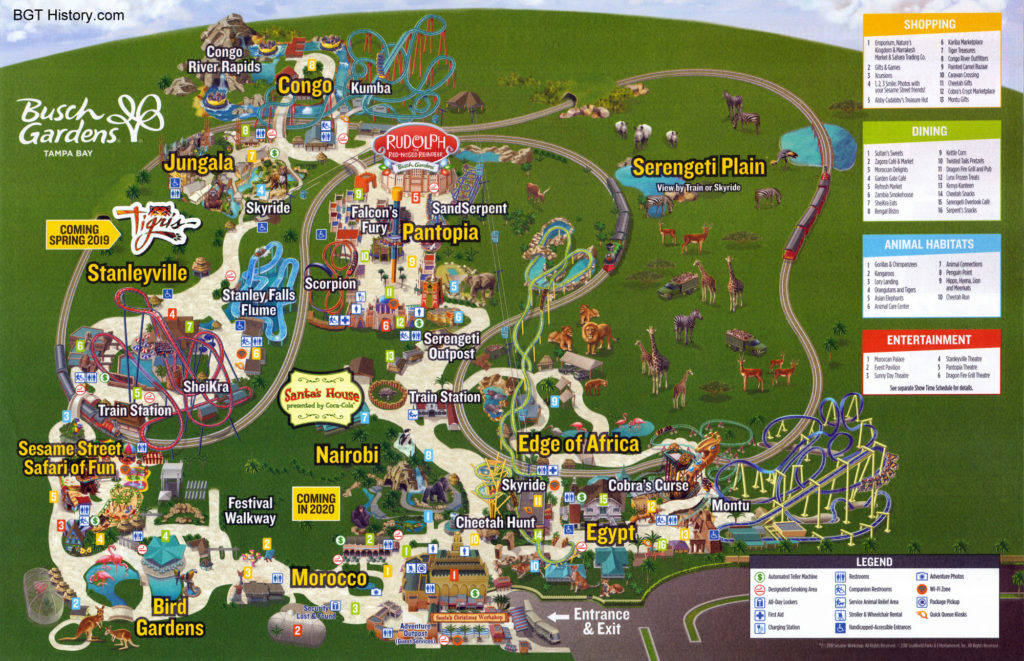 Upon reopening from the nearly three-month closure due to COVID-19 concerns, paper map distribution was suspended. Additional map boards were installed in the entrance area and around the park with signage encouraging guests to take a picture of it to have a digital version on their device to carry with them. This is a photo of one of those map boards, which marks the location of some of the face-covering relaxations zones and attractions that were temporarily closed at that point. It also lists the only scheduled entertainment available in Sesame Street Safari of Fun. 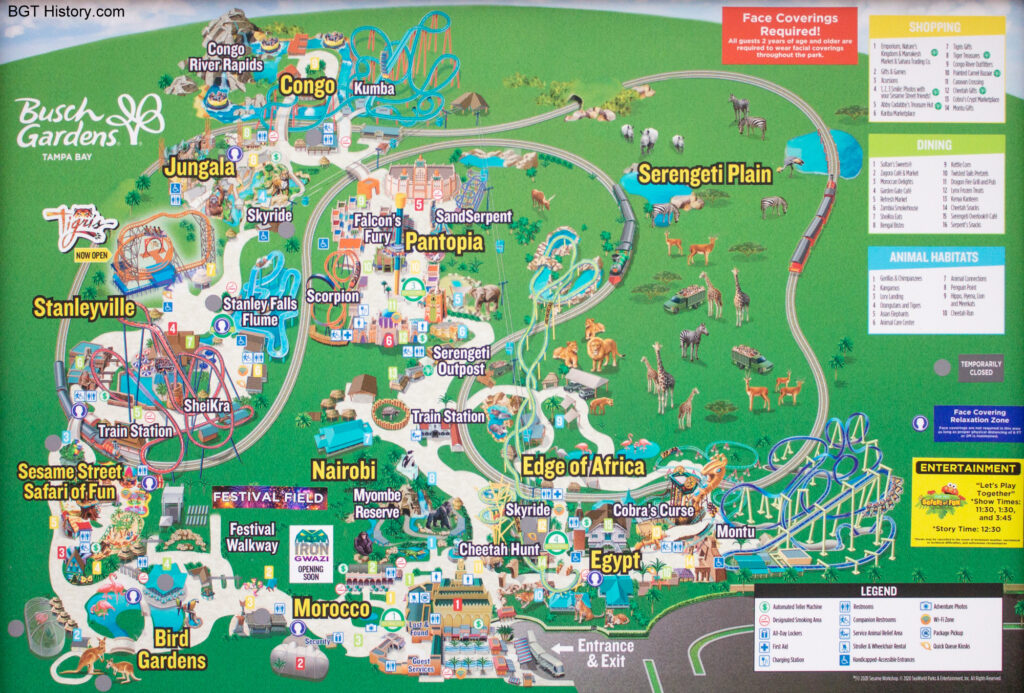 Due to COVID-19, the Howl-O-Scream map for 2020 was only released digitally on the event’s website and available to view on map boards around the park. 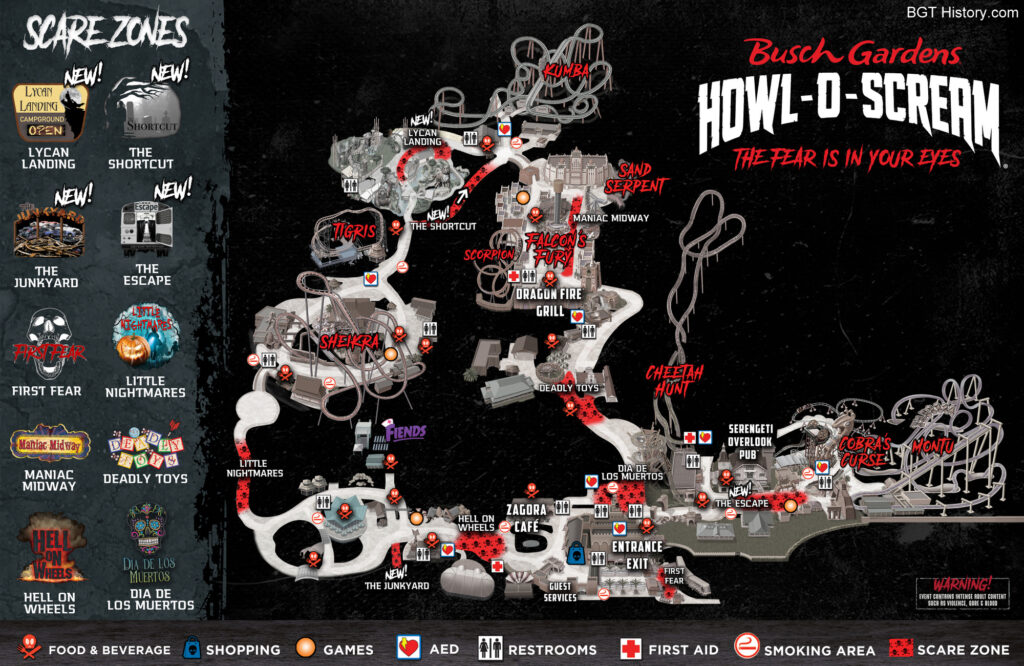 Check back soon as we add more park maps from Busch Gardens Tampa through the years!