Summer Nights 2017 at Busch Gardens Tampa was “reimagined” for the season with a new focus on an overall party atmosphere, special food & drink options, and the new Turn It Up! ice show at the Moroccan Palace Theater.

Summer Nights 2017 ran each evening from June 16 through August 6, with hours on Sundays through Thursdays until 9 p.m. and to 11 p.m. on Fridays & Saturdays. Shifting focus from fireworks and the performances of Kinetix, the park promoted Summer Nights 2017 with the new theme of “Party Louder, Play Later.” Guests were encouraged to share their experiences using #ShowUsYourSummer in posts on social media.

Along with night rides on the roller coasters, guests could also enjoy three new Party Zones around the park featuring live entertainment and special culinary options. Those zones were Vibin’ Village in Stanleyville, ¡Fiesta Festa! in Cheetah Hunt Plaza, and Luau in Pantopia. The culinary booths were scheduled to open as early as noon (see Guide and Menus sections below), with entertainment starting around 3 p.m. each day.

Vibin’ Village featured brightly colored decor with an African tribal theme, including a large DJ booth in SheiKra plaza. The emcee, along with “Party Starters” and stilt walkers, would lead guests in group dances. Nearby, the Tribal Eats booth served up a few African inspired dishes and a variety of beers and wines.

In Cheetah Hunt Plaza, ¡Fiesta Festa! brought Latin flair to the courtyard each evening. A DJ booth was tucked under the trees near the train tracks where party hits were played and guests were led in group dances. Party Starters and stilt walkers also joined in on the fun. The zone also featured two culinary booths and a tequila tasting under the canopy at Cheetah Gifts.

The last Party Zone was Luau, located in Pantopia in front of the theater. The theme, entertainment, and culinary options here were inspired by Hawaiin island life. There was no DJ here, with a focus on live entertainment instead. A host and musicians, usually a duo of drummers, would interact with the crowd. Stilt walkers & Party Starters would also join in the fun, sometimes having a “drum-off” with children. Two festival booths were located in the area, including one focusing just on drinks.

While not a designated Party Zone, Garden Gate Cafe also featured a small stage on the patio where various entertainment could be found at select times, including a steel drummer.

Much like the Food & Wine Festival held in the spring, a sampler lanyard was available for Summer Nights 2017 at Busch Gardens Tampa. For $34.99, guests could purchase the lanyard and receive eight food or beverage items from any of the participating Summer Nights locations. Pass member discounts applied.

Along with the main Summer Nights culinary booths in each Party Zone, there were several other locations near the zones and around the park that had special food & beverage items available for purchase or redemption using the sampler lanyards. See the full listings for all of the booths and additional Summer Nights Sampler redemption options in the Guide & Menus sections below.

For Independence Day, the park remained open until 10 p.m. and featured an extended fireworks show at 9:30 p.m. with a new patriotic melody with seating available in Gwazi Park. Prior to the fireworks, local band Actual Bank Robbers performed on the main Gwazi Park Stage beginning at 8:30 p.m. A Summer Nights Dance Challenge was also held.

Details for Summer Nights 2017 were released on May 24, with the park confirming that Kinetix and nightly fireworks would not be returning for the season.

On June 21, 2017, details were posted for the Fourth of July festivities, which included the only time fireworks were featured and Gwazi Park was used as part of the event.

A special printed guide was available for Summer Nights 2017, which featured a map of the park with the special food & beverage kiosks and other locations highlighted, along with a description of each Party Zone and information on the Sampler Card.

Click each thumbnail below to see the full-size image. 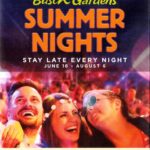 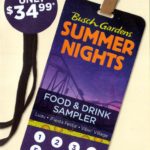 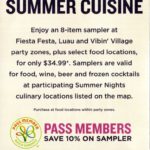 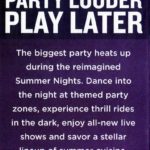 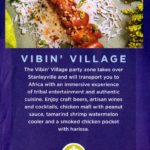 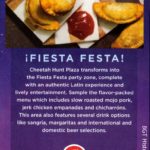 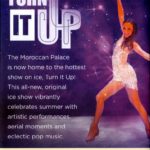 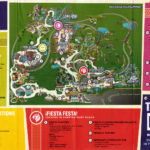 Each of the three Party Zones at Summer Nights 2017 featured at least one booth with special food & beverage items available beginning as early as noon each day. The items at the Summer Nights booths were able to be purchased a la carte or redeemed using the sampler lanyard. All items were available for one punch on the sampler lanyard, with food being the same size as purchasing out of pocket and drinks being served as a smaller sample size. Additionally, several regular culinary locations had offerings that were able to be redeemed for one sampler lanyard punch (see map in the Guide section above). Pass member discounts applied, and tax was not included in the menu price.

NOTE: The menus are copied directly from what was displayed at the park at the beginning of the event and include any spelling, grammar, or stylization errors that were present.

The Tequila Tasting at Cheetah Gifts was available on Friday and Saturday evenings and was not included on the sampler lanyard.

Additional information and images on Summer Nights 2017 at Busch Gardens Tampa will be added in the future.