Located in the Nairobi section across from the train station, Jambo Junction was home to a number of animal ambassadors and newborns with often changing exhibits and habitats. It closed in late 2016 and reopened in 2017 as the re-branded Animal Connections. 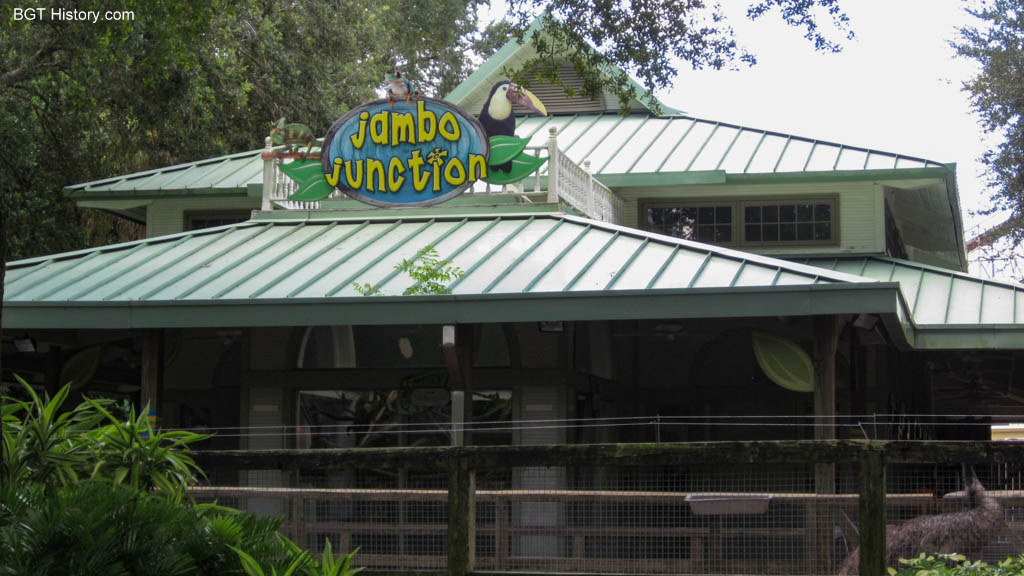 Part of a $250,000 revitalization project in late 2007, the Nairobi Field Station received upgrades and enhancements to house some of the theme park chain’s animal ambassadors. Often touring the country and stopping at schools or appearing on television, the trained animals were normally kept behind the scenes when not traveling. The plan was to have approximately 30 of the animal ambassadors in Jambo Junction and the attraction open by Christmas 2007, with about 60 calling the attraction home by June of 2008.

The parks at the time had a collection of about 100 that were trained as animal ambassadors, about half of which were raised in captivity. The other half were rescues, often from owners who had them as exotic pets but were unable to care for them properly. Species represented included coatimundi, lemur, anteater, skunk, and a variety of birds.

Jambo Junction officially opened to guests on January 12, 2008, with the goal of allowing guests to get closer and better connect with the park’s animal ambassadors. The press release announcing the opening:

Busch Gardens’ Nairobi Field Station has undergone a transformation to allow greater interaction between guests and the park’s animal ambassadors. The new area, which will open to the public this weekend, is called Jambo Junction – a name inspired by a Swahili greeting.

At Jambo Junction, guests will have the opportunity to participate in animal feedings, lessons in husbandry and behavior training. Featured animals include Caribbean flamingos, lemurs, cuscuses, sloths, opossums and baby animals.

This area is also the permanent home for Busch Gardens’ animal ambassadors. Animals in the ambassador program travel nationwide for educational presentations in schools, community events and media events. Each animal ambassador’s name and fun facts will be introduced to the guests.

Jambo Junction had a mix of both permanent animal ambassador residents along with temporary ones, including newborns, animals being rehabilitated, and new additions to the park’s collection that were housed there before being moved to their own habitats.

As part of holiday festivities at the park, kids were invited to stop by Jambo Junction on December 24 and 25, 2010 to make an animal ornament to take home as a souvenir. On December 26, guests were invited to help make holiday-themed animal enrichment.

On April 16, 2011, a male cheetah cub and his new yellow lab puppy companion were added to the Jambo Junction lineup. They were eventually moved to the new Cheetah Run habitat.

At the end of August 2011, the newest addition to Jambo Junction was introduced – a five-month-old fennec fox. Later in the Fall, the park introduced four Jambo Junction residents to the animal ambassador program – native Florida pine snakes Slash and Spruce, Rex the Florida kingsnake, and a Saharan uromastyx. Slash and Spruce were both hatched at the park in October of 2007, Rex arrived as a rescue in October 2002, and the Saharan uromastyx hatched in April 2011 and was later moved to the park. The newcomers joined the other reptile animal ambassadors, including Ybor, a Cuban iguana, Marla, a leopard gecko, and Oscar, the blue-tongued skink, for close-up encounters on the pathways nearby.

In December of 2011, on Fridays and Saturdays from the 9th through the 24th, guests were invited to join Education and Conservation Department for Jolly Times at Jambo Junction from 1 to 3 p.m. Activities included creating enrichment for the animals, coloring ornaments to take home, and up-close encounters with animal ambassadors.

In February 2012, guests were introduced to new animal ambassadors, a male and female short-beaked echidna. The male was around one year old at the time and the female around six months. Echidnas are one of only two types of mammals that lay eggs. Around this time a female Reeves muntjac named Samantha retired to Jambo Junction. She had previously served an important role as a companion animal for young hoof stock at Busch Animal Outpost, the park’s private reserve in Dade City.

An open house was often held at Jambo Junction. A park blog post in March 2012 shared that it occurred daily from 1 to 2 p.m., and allowed guests to come inside the building to get a closer look at the facilities and animals housed there, along with a special encounter with an animal ambassador, like Rainbow the macaw, Mario the sloth or Fez the fennec fox.

New on exhibit as of April 2012 were Halloween crabs, native to the rainforests of Central America. The uniquely named crabs spend most of their time on land and forage mostly at night.

On March 30, 2013, a one-time special event called Reptile-Palooza was held at the park in celebration of two new species in the reptile hall of Jambo Junction. A Gaboon viper and Chinese crocodile lizards were recently added to the exhibit. In addition to special sessions at Jambo Junction, animal care experts also held presentations about reptiles in Edge of Africa, Jungala, Morocco, and Nairobi.

In August 2013, the park introduced guests to Batari, a two-year-old female Komodo dragon visiting from the Los Angeles Zoo. Batari could be seen in her habitat in the reptile section of Jambo Junction.

The park celebrated International Sloth Day at Jambo Junction on October 18, 2015. Crafts, games, stickers, and up-close encounters were part of the event.

On August 2, 2016, guest Joseph Corrao, 45, picked up and violently threw to the ground Pinky, a flamingo and popular Animal Ambassador in her habitat in Jambo Junction. Pinky was later euthanized by animal care staff due to the extent of her injuries. Corrao was arrested on a charge of felony animal cruelty. A memorial bench honoring Pink was later added just outside of Jambo Junction near the flamingo enclosure.

Jambo Junction closed on December 7, 2016. While the park would not confirm a reason for the closure, it followed a series of layoffs of approximately 320 ambassadors company-wide. Signage was removed and walls blocking the entrance and exit were erected before the park opened on December 8.

As of January 2017, the park stated animals still at the former Jambo Junction habitats were being relocated within the park or being sent to other facilities. By early February, the Pinky memorial bench was relocated to the small deck overlooking the flamingo habitat in Bird Gardens.

Jambo Junction would reopen that spring as Animal Connections with many of the former residents still in their enclosures.