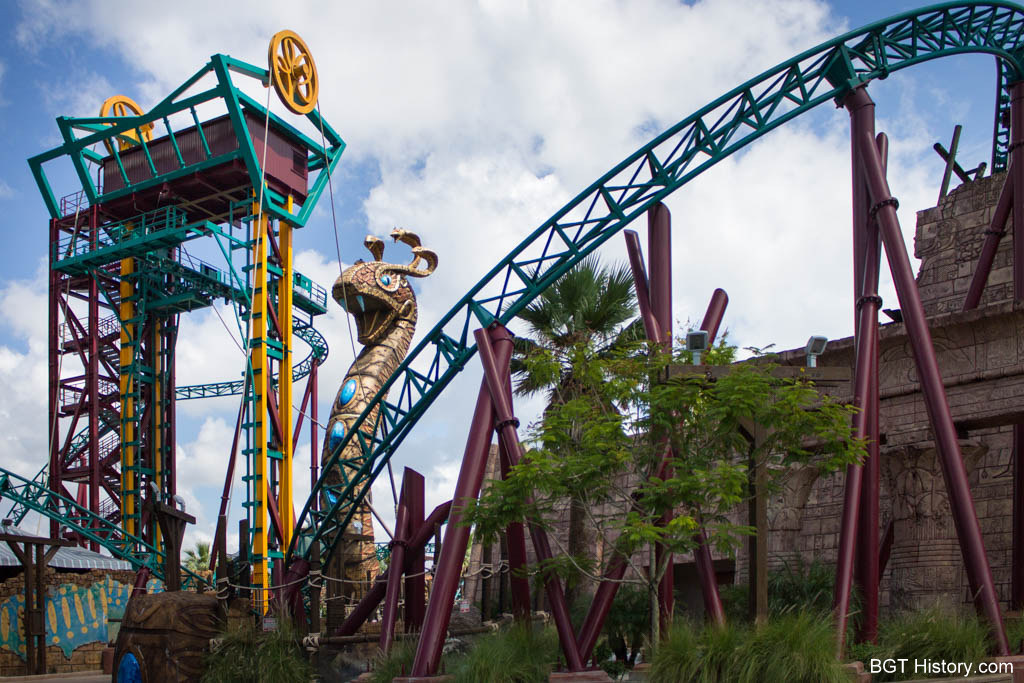 Cobra’s Curse has the most detailed queue and storyline of any of the park’s attractions. The queue is also the only in the park which is predominately indoors and air-conditioned. The story begins outside the attraction, where guests can see the large stone body of the Snake King wrapping away from the lift tower and around the front of the gift shop and queue building, to where it has been “raised” above the entrance.

The story of the Snake King goes back 2,000 years when villagers demolished the temple of the powerful being. Today, it’s an archeological dig site where crews have awoken the Snake King and unleashed his curse again.

Guests entering the main queue go through a short switchback outside, under scaffolding from the dig site, and into a hallway where workers’ tools and messages can be seen about their finds. From there it’s back outside, where the majority of the switchbacks are located, beneath the workers’ camp perched above. Back indoors, guests pass through the excavated tomb, with hieroglyphs along the walls telling the story of the Snake King. The first room holds a variety of “antiquities” uncovered by the archaeologists, and the live snake exhibit.

The exhibit features several species of some of the world’s most feared snakes, but they are safely behind a glass window measuring seven feet by eight feet.

From there, guests pass through another darkened hallway before entering another large chamber. Inside that room, one wall seemingly comes to life through the use of projection mapping. One last hallway awaits guests before the station, where a safety video plays overhead with rider information.

In the station, guests are grouped together before being directed onto the moving walkway and into the cars.

Cobra’s Curse participates in Quick Queue, with the entrance located just to the left of the main entrance for the ride. The Quick Queue line bypasses a majority of the interior scenes, including the snake habitat and projection mapping room.

Riders must be at least 48 inches tall to ride alone, or at least 42 inches with a parent or guardian. Cobra’s Curse has a theoretical capacity of about 1,000 guests per hour.

(This section will be expanded in the future.)

The Serengeti Express closed temporarily in mid-March 2015 as part of the yet unannounced 2016 attraction construction.

On May 27, 2015, the park teased on social media that construction walls had gone up in the Egypt section of the park. Cobra’s Curse was officially announced on May 28, 2015. From the original press release:

Busch Gardens Tampa puts a spin on family thrills in 2016 with a brand new family thrill ride – Cobra’s Curse. This spin coaster is the only one of its kind in the world, featuring a vertical lift and taking riders on a whirlwind adventure of exciting explorations.

Located in the Egypt area of the park, explorers will come face-to-face with an 80-foot snake icon, trek over the park’s Serengeti Plain and discover the mysteries of an Egyptian archeological excavation.

“The addition of a family spin coaster complements the selection of thrill rides Busch Gardens offers, and we know it’s an attraction that guests from across the globe will enjoy,” Dean added. “We continue to find new and exciting ways to offer thrills for the entire family, and we know Cobra’s Curse will even further solidify Busch Gardens as Florida’s Thrill Leader.”

A video was released that accompanied the announcement:

In early June, the park shared an image showing demolition work in the Egypt area through their social media channels: 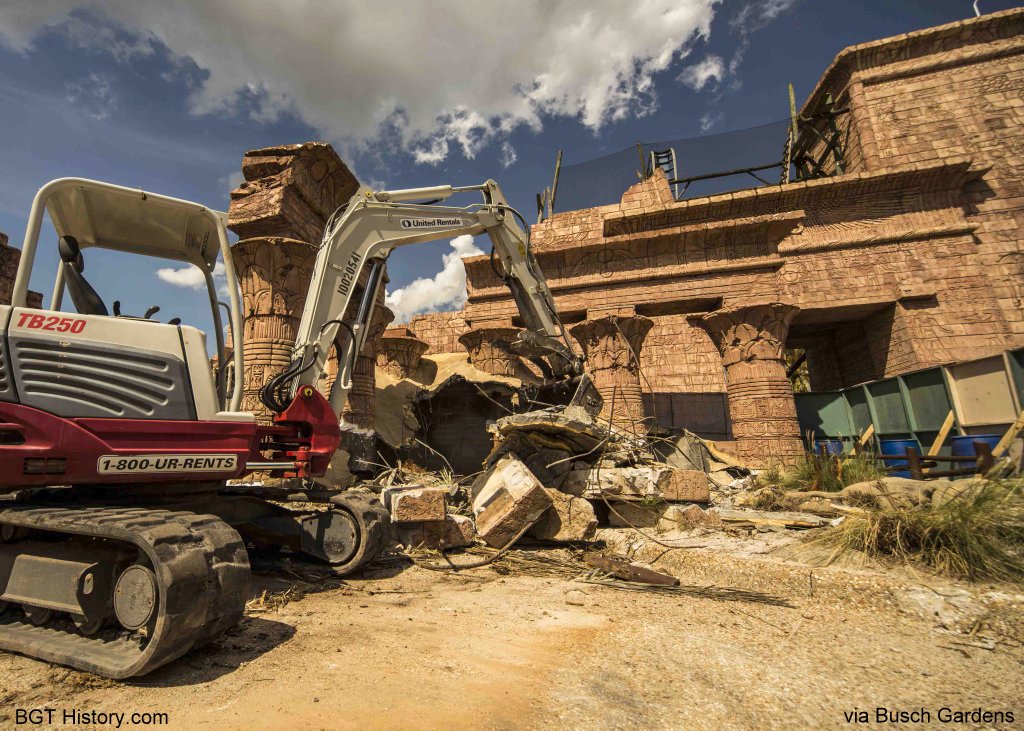 The first official construction update provided by the park was released on their blog on July 14, 2015. The post described recent progress, which mostly entailed demolition inside of the former Tut’s Tomb attraction and around the site where Cobra’s Curse would be constructed in the coming months on the 2.5 site. 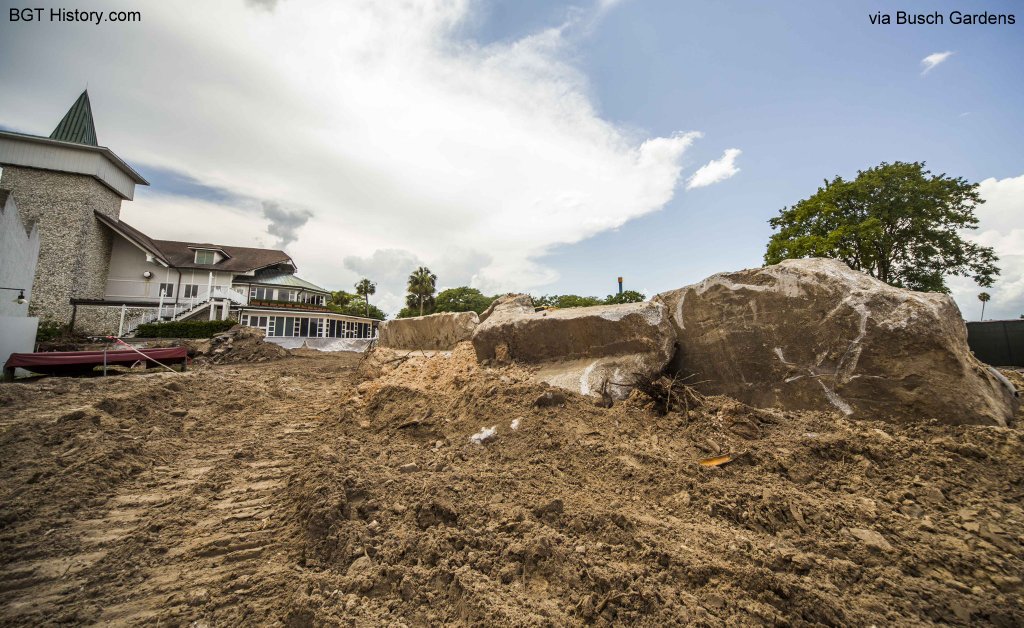 In the second official construction update on August 14, 2015, it was shared that demolition had been completed and work had moved to install underground utilities and pouring the concrete foundation for the 95-foot tall vertical lift tower. The square foundation is 20 feet deep and 40 feet wide, taking 25 trucks to bring in the 6,750 cubic yards of concrete poured into the forms strengthened with steel rebar. It was also noted the first batch of ride steelwork had been started in Germany and would make the 4,800-mile journey to the park in the fall. 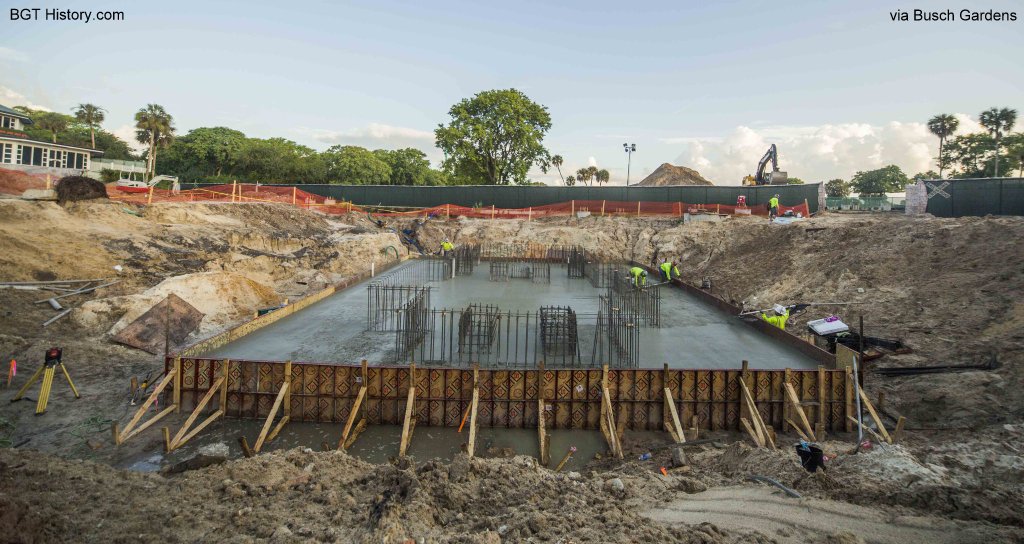 The park shared a picture showing track pieces arriving on the storage lot north of Adventure Island on September 22, 2015: 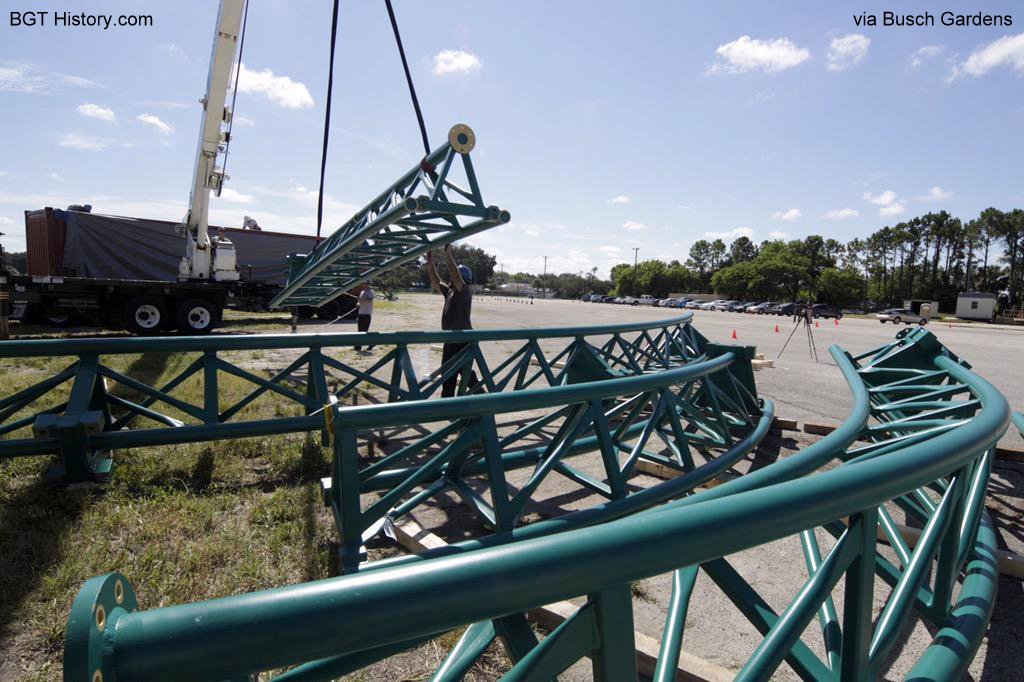 A third official construction update was posted to the park’s blog on October 9, 2015. It detailed recent work on the site, including the installation of the first steel ride supports the previous week and the first track segment on the 9th. A total of 14 shipping containers of ride steel had been delivered for the project. Other work completed prior to the update included foundation work for the station and lift tower, two trenches dug out, and a number of support foundations poured and awaiting steel columns in the weeks ahead. 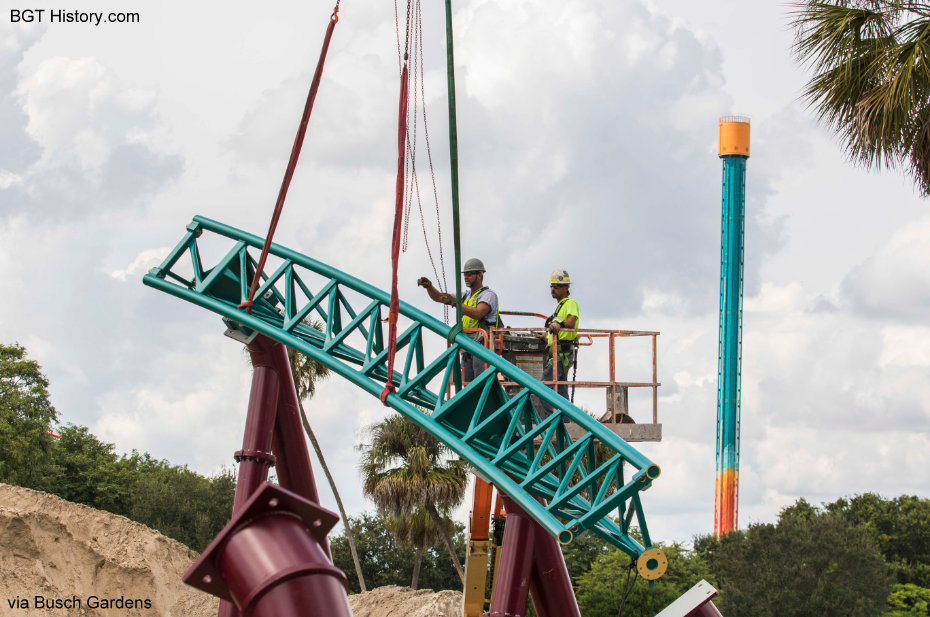 Ten days later, the park released a time-lapse video of those first track sections being installed:

The park also provided official construction updates via YouTube, including this one released November 2, 2015, which revealed the official logo:

At the International Association of Amusement Parks and Attractions (IAAPA) annual expo in Orlando, Busch Gardens unveiled a model of Cobra’s Curse on November 17, 2015. The model showed the entire layout and many of the theming details that guests would see when it opened. 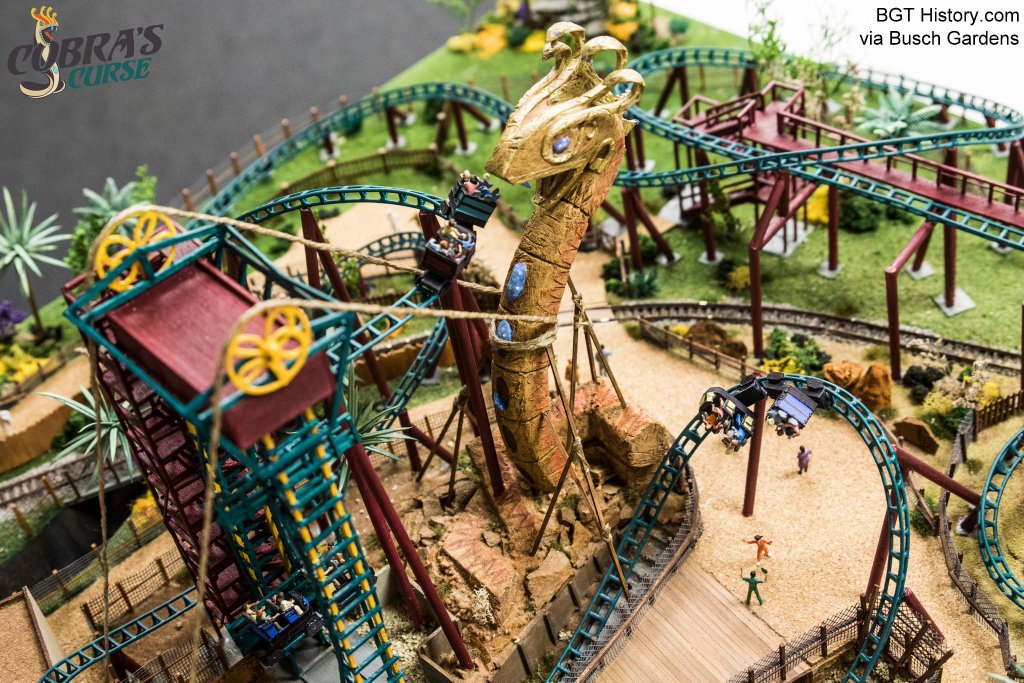 The fourth official construction update on the park’s blog was posted on November 20, 2015. By that point, a total of 34 shipping containers of ride parts had arrived at the park, and about a third of the track had been assembled, including the brake run where the cars turn backward and the traditional lift hill. The first and second trenches were complete, and walls were up for the station and maintenance building. 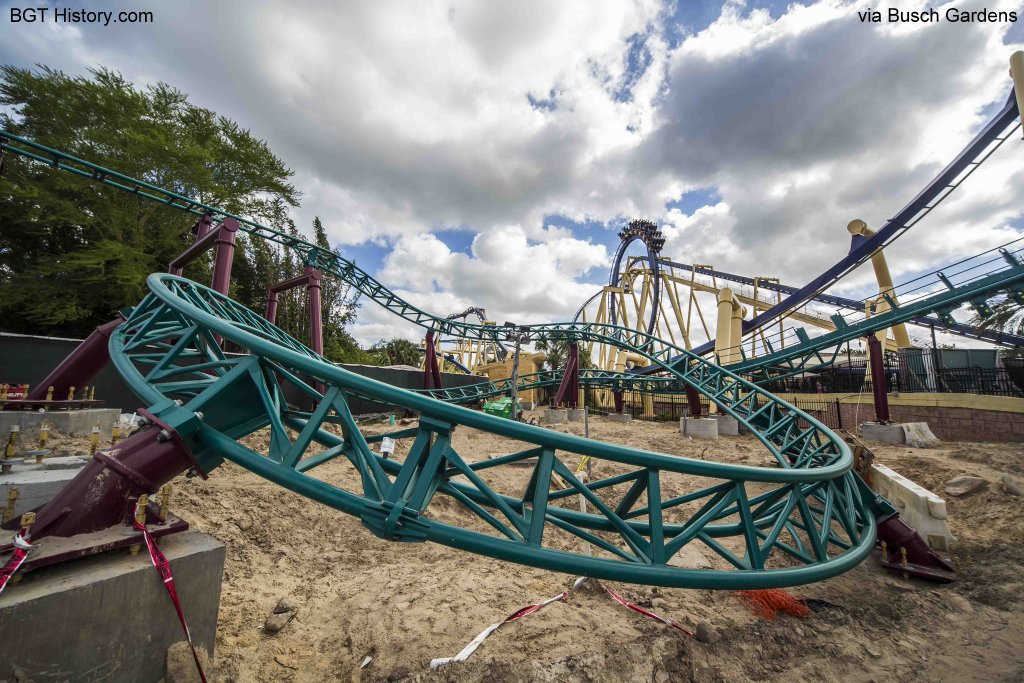 The park released a 360-degree video on their YouTube channel on December 10, 2015, giving great views at a number of spots around the construction site:

Ringing in the new year, the park posted its fifth official construction update on January 12, 2016. Work over the holidays included roof trusses being installed over the station and maintenance building, and much more of the track including the highly banked turn over the new guest pathway being built. The focus of the work in the following weeks was on the vertical lift tower and stairs attached to it for maintenance and emergency access.

Three days later on January 15, the park announced the cars for Cobra’s Curse had arrived at the park, sharing an image of them in a warehouse wrapped in plastic. 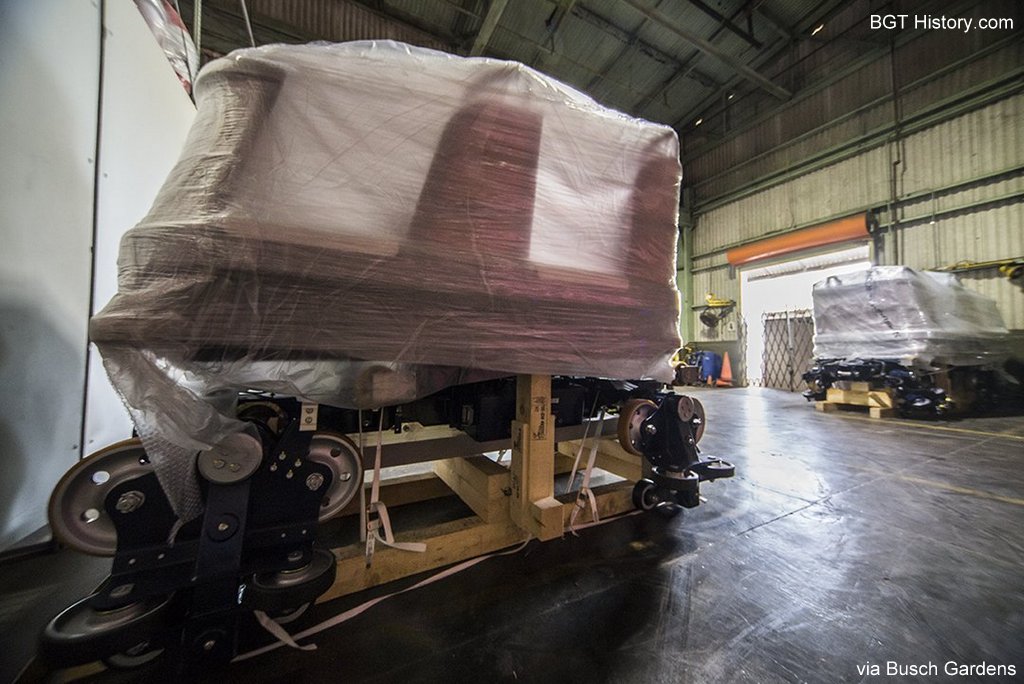 Near the end of January, major components for the vertical lift tower were installed. 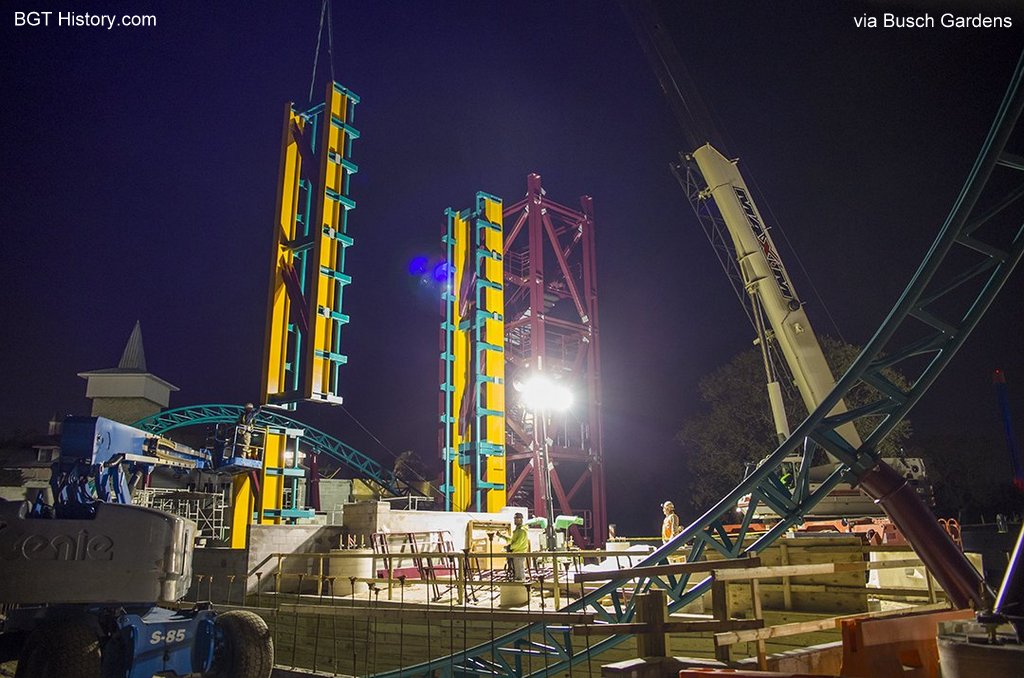 A hard hat tour for invited media was held on February 17, 2016. During the event, attendees were taken on the construction site to get pictures and video of the progress made to that point. 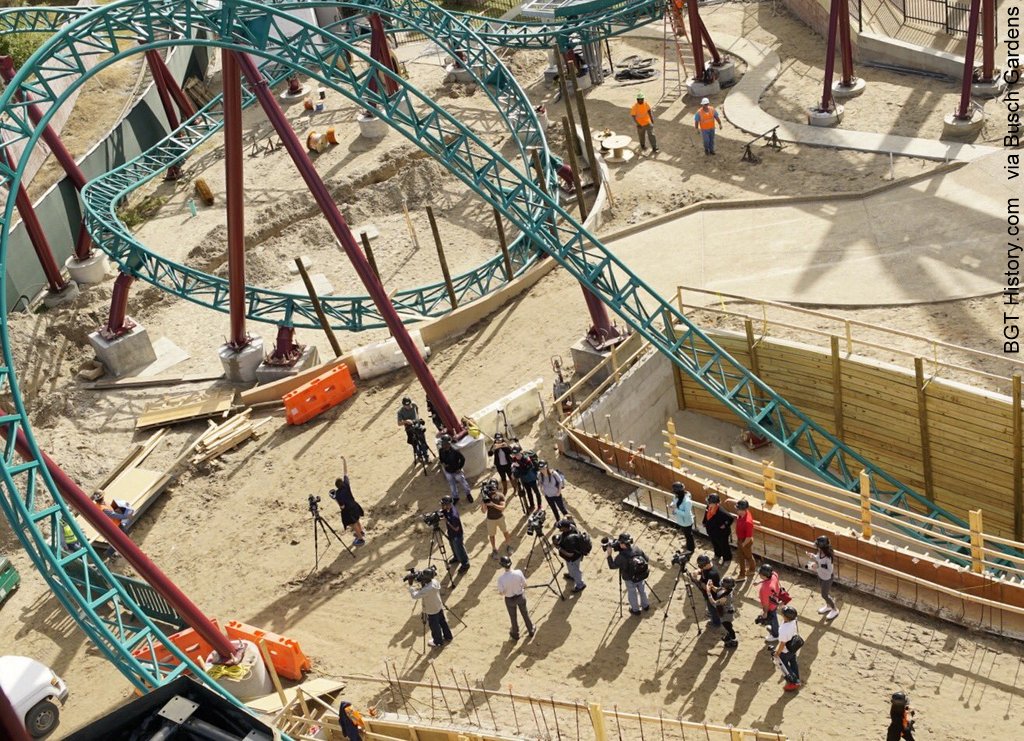 The ride vehicle for Cobra’s Curse was also revealed and was placed on display in the Egypt section of the park. A video was released by the park shortly after:

Also on February 17, the park released details on the queue for Cobra’s Curse, including how guests would be able to get within inches of a themed enclosure featuring some of the world’s most notorious snake species. From the release:

“The snake exhibit at Cobra’s Curse will allow us to combine the best of what Busch Gardens has to offer – animals and thrill rides,” says Jeff Andrews, ‎Vice President, Zoological Operations at Busch Gardens Tampa Bay. “This exhibit will give our guests an unforgettable experience while continuing the conversation around conservation and education by highlighting the species and their important role in the wild, which is our top priority.”

The release stated the 400-cubic-foot snake exhibit would include Jameson’s mambas, Angolan pythons and rhinoceros and gaboon vipers. Along with thematic elements relating to the ride, the exhibit was also being designed with various enrichment components.

By late February 2016, the two highest points of the new attraction were topped off – the 70-foot vertical lift hill, and the 80-foot tall Snake King icon. The giant snake icon weighs 30,000 pounds and is made up of nine stackable pieces hoisted into place by a crane. It features four-foot-long fangs and three-foot-wide eyes. 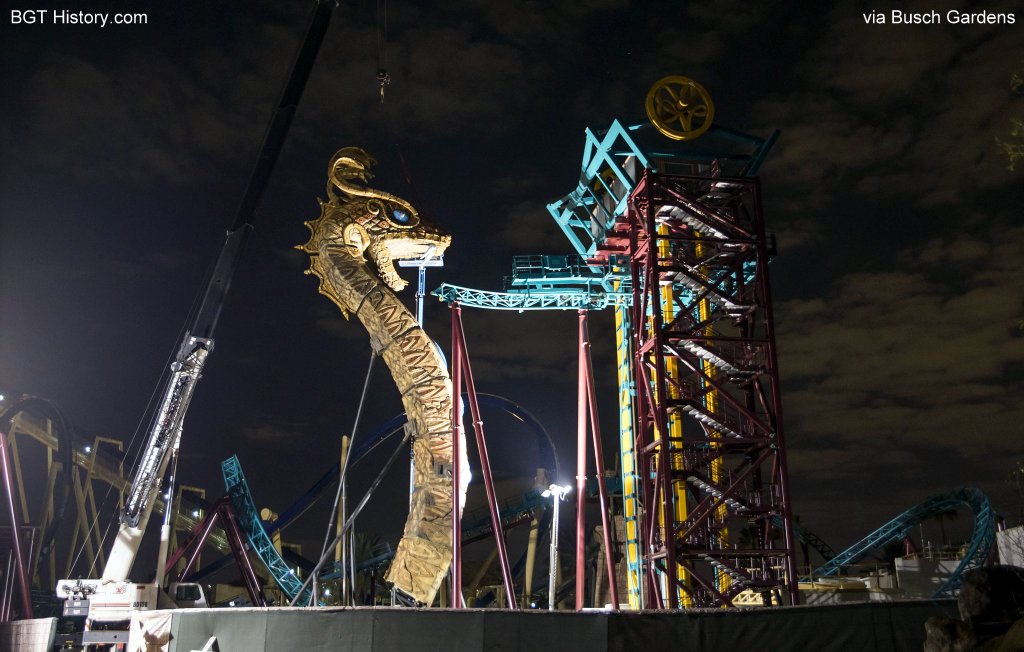 A detailed video was released by the park on March 22, 2016, giving an update on construction progress, more information on some of the ride’s elements, and some computer-generated footage of what Cobra’s Curse would look like when operating.

A teaser video was released on April 27, showing a POV on the vertical lift up to the Snake King.

A day later, the park posted their second webisode, with a focus on the queue experience, including the snakes that would be on display in a specially built habitat.

Continuing their promotion of Cobra’s Curse, a teaser video was released by the park on May 5 giving a glimpse of what the ride would be like for guests.

The park released the first full-ride through POV video for Cobra’s Curse on May 11, 2016. The video featured views from different angles, and also a glimpse at progress around the roller coaster site as construction wrapped up.

Towards the end of May, the park shared several images over the course of several days on its Twitter account. Each image showed a different hieroglyphic scene from inside the queue of Cobra’s Curse.

On June 10, the park announced Cobra’s Curse would officially open to guests on Friday, June 17, 2016. Media day for invited outlets was held the day before the grand opening, on June 16.

Annual pass members received exclusive access to Cobra’s Curse on weekends in July, being admitted into the park and the Egypt area one hour before the regularly scheduled opening time.

Cobra’s Curse was featured on an episode of Cake Wars that premiered July 18, 2016, on Food Network. The episode challenged four bakers to create a Cobra’s Curse themed cake, with the winner’s cake to be on display during a party celebrating the roller coaster opening. Brian Morrow, Vice President of Theme Park Experience for the SeaWorld & Busch Gardens parks, was the celebrity judge on the show.

At the beginning of 2017, Cobra’s Curse closed for its first major refurbishment, with a scheduled reopening date of February 3.

Additional details and images on Cobra’s Curse will be added in the future.