SheiKra is a steel roller coaster located in the Stanleyville section of the park. It was converted to floorless trains for the summer of 2007. 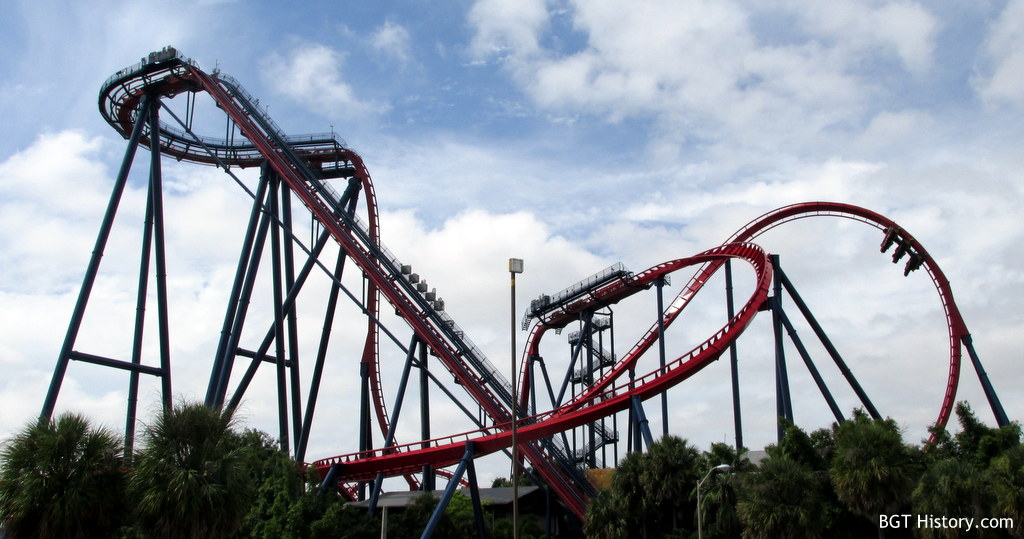 SheiKra was announced in October 2004 as the first dive roller coaster in the United States, and only the third in the world. Stats referenced in the press release include SheiKra’s 200-foot height, a 45-degree lift hill, 90-degree first drop, and 70 miles per hour maximum speed. The new ride was also the first dive coaster to incorporate an Immelmann loop, a water feature, and a second 90-degree, 138-foot drop through an underground tunnel. The trains featured three rows with eight seats in each, for a total of 24 riders.

The roller coaster is set in the ancient ruins of an African civilization, which includes various architecture and other theming details representing that storyline. The name SheiKra was inspired by a small bird of prey called “shikra” native to Africa and Asia. Along with the theming and roller coaster itself, the Stanleyville area also received improvements including the addition of Zambia Smokehouse.

SheiKra was designed by Bolliger & Mabillard, who also designed Kumba and Montu. The company said it took about six months to design the layout of the roller coaster and about four years for the project overall. The total project cost including accompanying theming was estimated at $20 million, although that number was not confirmed by the park.

In late January 2005, SheiKra was topped off at the 200-foot mark. Crews placed a ceremonial evergreen atop the newly placed track segment. By late April, testing started on the roller coaster, with an announced opening date of May 21, 2005.

Two years later, SheiKra went through a major change. Announced in February 2007, the roller coaster would receive new floorless trains for the summer season, with a grand reopening date set for June 16, 2007. Riders had their last chance to experience the regular trains on Memorial Day, May 28 before the coaster closed for its refurbishment. The track itself remained unchanged, but work in the station included a special floor that would raise when the trains were in the station to allow for loading and unloading guests. The existing seats and shoulder restraints were moved to the new trains.

A limited number of presentation pieces were created to celebrate SheiKra going floorless. Small sections of the old trains’ floor were preserved inside of a clear block, with the Busch Gardens & SheiKra logos etched on the front. The piece measures about 4 1/2 inches tall. 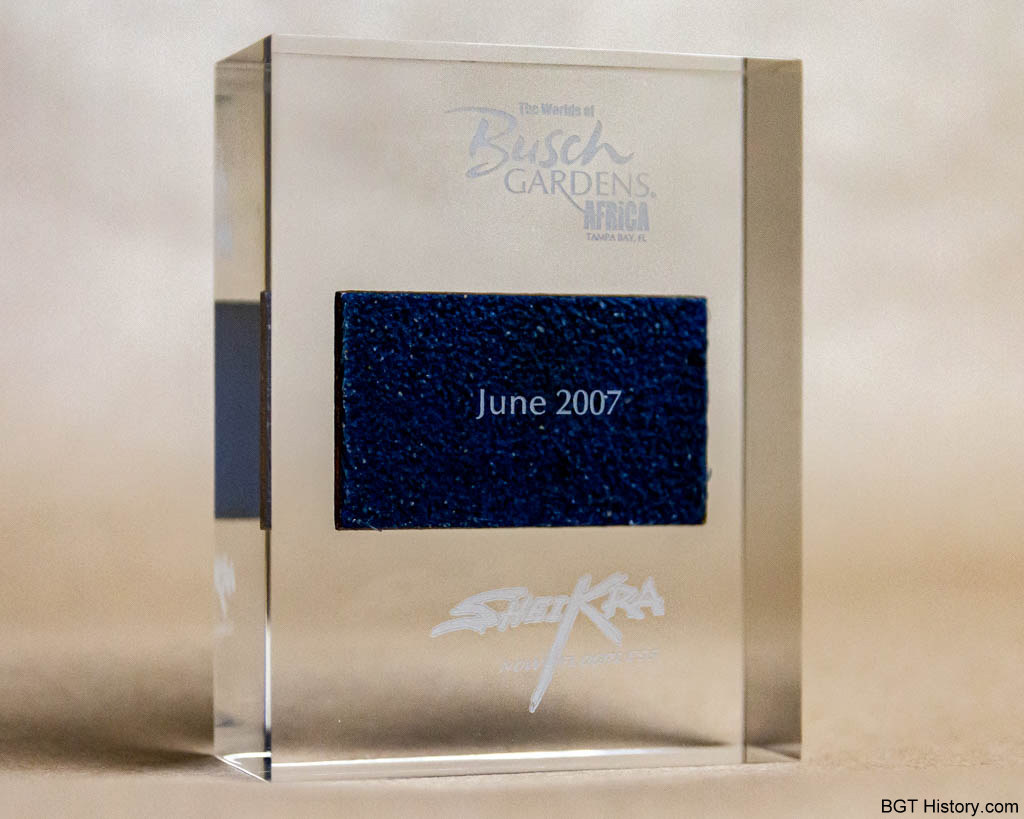 On July 8, 2012, SheiKra was featured in the premiere episode of Insane Coaster Wars on Travel Channel.

From January 7 through February 15, 2013, SheiKra was closed for a refurbishment which included a complete repainting. The process would take a team of 40 professional industrial painters working on shifts around the clock, over 6,000 man-hours in total. It would also take more than 600 gallons of paint across 165,000 square feet of surfaces before the project was complete.

During the summer of 2014, the park advertised a special package available at SheiKra or Cheetah Hunt. For $24.95, guests could get a 6×8 photo print and a DVD of their ride at either attraction.

SheiKra has a short refurbishment scheduled from September 14 to 18, 2015.

On May 12, 2016, a “ride stoppage” occurred on SheiKra that received some media attention. Local station Bay News 9 reported the incident live on air using images from their helicopter, which showed guests being evacuated from near the top of the lift hill. All guests were eventually helped down and there were no reported injuries. The park released an official statement afterward:

At approximately 3:45 the Sheikra [sic] roller coaster unexpectedly stopped mid-ride with 64 guests on board. At the time the ride launched, there was no indication of any operational issues. Passengers have been evacuated and no injuries have been reported. The exact cause of the ride stoppage has yet to be determined. Busch Gardens Tampa Bay takes the safety of its guests and employees very seriously and will conduct a thorough review of the coaster and its systems before reopening the ride.

A scheduled refurbishment in late spring 2017 was extended at the last minute. Originally scheduled to reopen on June 10, the roller coaster remained closed through June 15, reopening to guests in time for the start of Summer Nights on June 16, 2017.

At the beginning of 2022, the park shared SheiKra would be closed for refurbishment from January 31 through March 4.

Additional details and images on SheiKra will be added in the future.