Built on the site of the former brewery, Gwazi was a dueling wooden roller coaster designed by Great Coasters International and opened in Summer 1999. 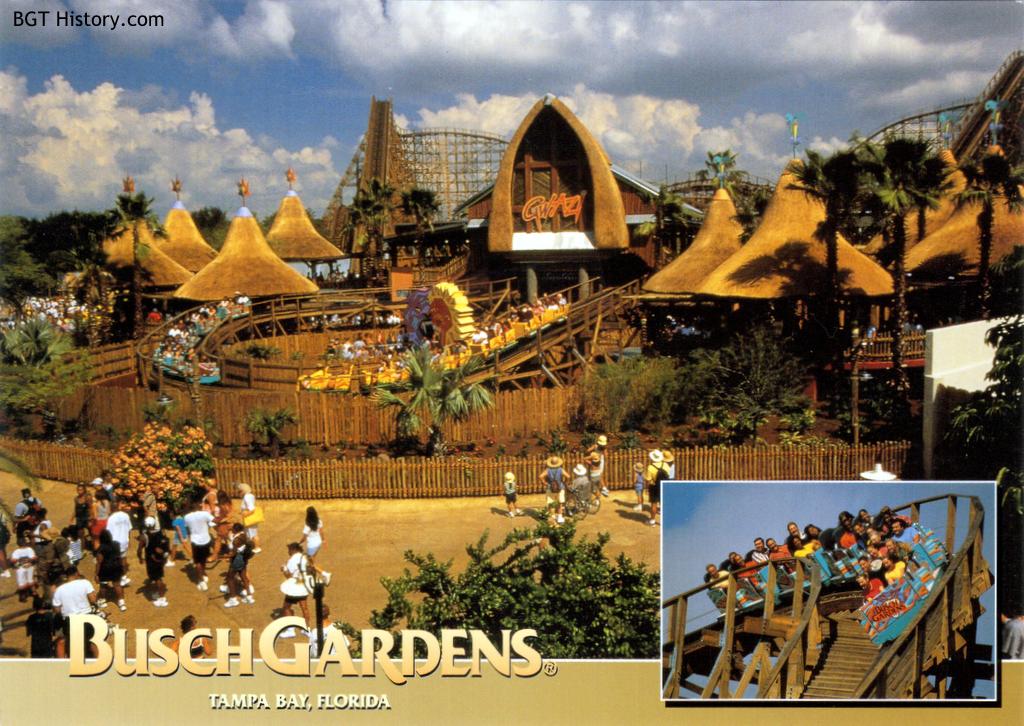 By the summer of 1998, rumors of a new wooden roller coaster coming to the park were in circulation. By the beginning of June, it had been reported in the Orlando Sentinel that a ten million dollar attraction would open in 1999. It was about that time that rumors of large deliveries of lumber to the former site of the brewery were also coming out.

A press event was held on July 15, 1998, to announce the park’s latest project. The invitations that went out to members of the media:

A drum call summons the bravest of warriors as these two forces prepare to bring their intense battle to, Busch Gardens Tampa Bay.

Lurking among the hidden forests of Africa, the mythical Gwazi beast – part lion, part tiger – emerges while caught in a never-ending internal struggle. A battle for supremacy between its two beastly sides is legendary. Now, adventurers from around the globe can experience the power of Gwazi lion and tiger at Busch Gardens Tampa Bay.

Standing 100 feet tall, one of America’s newest and largest double wooden roller coasters tantalizes riders to choose a side before catapulting across 1.5 million board feet of southern yellow pine. In an all-too-fast 2 ½-minute melodrama, guests also are taken through six adrenaline-pumping flyby journeys at a combined speed of 100 mph.Busch Gardens Tampa Bay’s reputation as Florida’s premier adventure park was bolstered even further in Summer 1999 with the opening of this world-class thrill ride. Gwazi’s dueling coasters deliver unrivaled family excitement in a frenzied race to the finish. An African village encompassing Gwazi further immerses guests in the flavor and style that comprises Busch Gardens Tampa Bay. Gwazi boasts nearly 7,000 feet of track, which engages both coasters in six distinctly harrowing “flyby” encounters. The Gwazi Lion and Gwazi Tiger trains generate up to 3.5 G forces and speeds of 50 mph for nearly three minutes as they careen over 15 towering hills and a dozen hard-angle turns.”

Guests entering Gwazi’s village plaza are challenged to choose between the coasters’ two distinct track layouts, creating an irresistible invitation to compete against family, friends and other guests. Gwazi’s Lion and Tiger trains each hold 24 riders, allowing a capacity of more than 1,400 guests per hour.

The Gwazi legend instantly springs to life as both coasters leap simultaneously from the queue house and cross by each other, foreshadowing future pulse-pounding confrontations for dominance. After ascending each track’s 90-foot lift, Gwazi’s Lion and Tiger trains plummet at combined speeds of 100 mph and “flyby” within several feet of each other.

Skill games including a “Water Wars” showdown with water balloons and giant slingshots create an atmosphere of friendly and likely wet competition.

From its immersion theming to competitive atmosphere to family-oriented excitement, Gwazi adds yet more adventure to Busch Gardens’ home of the world’s top-rated thrill rides.

By early June 1999, several test runs with coaster enthusiasts were held for a commercial shoot. Early riders reported the coaster to be smooth and offer a lot of airtime.

An event was held on June 16, 1998, to allow members of the media and Florida Coaster Club to ride Gwazi for the first time. The following day, annual pass members who purchased special tickets participated in a “First to Ride Gwazi” event. The new roller coaster officially opened to the public the next day, Friday, June 18, 1998.

On July 24, 2006, 52-year-old Thomas Welch suffered an apparent heart attack after riding Gwazi. Emergency crews responded and performed CPR and used a defibrillator, but Welch was later pronounced dead at a local hospital.

Complaints about Gwazi’s rough ride were a common issue as the roller coaster aged. The Lion side of the roller coaster was re-tracked in 2009, and the Tiger side the following year. For 2011, completely new trains were ordered. From the park’s blog article announcing the changes:

The new trains provide the smoothest way to ride a wooden coaster and are highly regarded for their spacious, cushioned seats and individual row design that resembles wooden roller coasters trains from the early 1900s. The open sides of the new cars will provide unobstructed views of the 7,000-plus combined feet of Gwazi’s two twisted tracks.

Just before the roller coaster reopened, the park shared a video of the testing of the new trains, complete with water dummies:

A media event was held on January 20, 2011, to debut the new trains. Mark Rose, the Vice President of Design & Engineering, spoke about the roller coaster’s history and decision to replace the four original Philadelphia Toboggan Coasters, Inc. (PTC) six-car trains. In addition to the added comfort of the new trains, they also featured new graphics on the front and sides of the trains with lion and tiger theming.

A special promotion accompanied the reopening on January 22, 2011. Riders that day received a coupon for 30% off food & beverage at any culinary location, and any enthusiast wearing a Gwazi, American Coaster Enthusiasts (ACE) or Florida Coaster Club shirt also received a free on-ride photo.

Then on January 9, 2015, the official announcement came from the park:

February 1 is the last day for thrill seekers to ride Gwazi at Busch Gardens Tampa as the park prepares to permanently close the wooden rollercoaster.

Gwazi opened in 1999 as Florida’s first dueling wooden rollercoaster, providing guests with thrilling and memorable experiences for more than 15 years.

“No decisions have been made about what lies ahead for Gwazi or for the future plans of that area of Busch Gardens,” said Park President Jim Dean. “But, we are always looking for ways to enhance guests’ experiences, so stay tuned for more news.”

Following its closing, rumors swirled as to what might replace Gwazi, or if it might receive new life as a refurbished/re-tracked roller coaster.

By the beginning of April 2015, the large Gwazi sign on the station building had been removed.

Just a few months after its closing, the park left the door open as to what might happen to Gwazi in the future. In a newspaper article in May 2015, park spokesperson Travis Claytor was quoted saying “We are still looking into what makes sense to replace Gwazi, which includes do we retrofit it with steel tracks. Gwazi is still standing. We haven’t made the decision on what to do with it. We have no time frame on when that decision will be made”

Starting in the fall of 2015, the queue and station were used for one of the haunted houses at Howl-O-Scream.

Some of the wood from Gwazi would be reused at sister park SeaWorld Orlando in both the Rescue Store and in the Manatee Rehabilitation area.

On September 12, 2018, at a press event to announce Tigris that the park also teased something would replace Gwazi in 2020.

Additional details and images on Gwazi will be added in the future.