The tallest attraction at Busch Gardens Tampa, Falcon’s Fury is a drop tower that stands at 335 feet in the Pantopia section of the park. 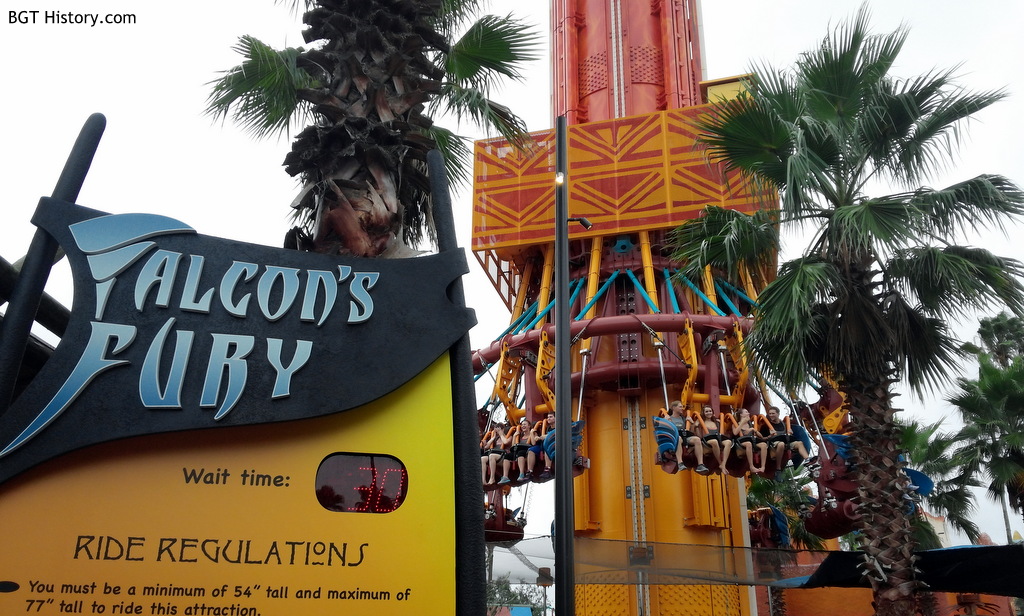 Falcon’s Fury is the tallest attraction at Busch Gardens Tampa, standing at 335 feet. Starting the journey up the tower in the seated position, riders are tilted back as they reach the maximum height of 282.5 feet, where they are held facing the ground before dropping at 60 mph. As the magnetic brakes slow down the ride carriage, the seats kick back out to the seated position, giving the sensation of a parachute opening before gliding back to the base. Falcon’s Fury has been described as the closest thing to skydiving without jumping out of a plane.

A maximum of 32 riders, split into eight separate seating sections, ascend the tower each cycle. At the top, the amount of time riders are held before dropping is randomized between one and five seconds. Guests on Falcon’s Fury experience five seconds of freefall and forces up to 3.5 Gs during the ride.

Development for Falcon’s Fury began around the time work was finishing up on Cheetah Hunt in 2011, according to Jeff Hornick, Director of Design & Engineering at Busch Gardens Tampa in 2014. Preliminary work included soil samples taken from around the Sandstorm ride to see if the ground there could support the enormous structure.

Sandstorm’s final day of operation was Sunday, June 2, 2013. A press release announcing the ride’s closure hinted the park was preparing “to drop big news” on what would be coming to the site.

The park officially announced Falcon’s Fury on June 11, 2013. Along with the announcement came the hashtag #FalconsFury. From the press release:

In spring 2014 Busch Gardens is taking guests’ experiences to new heights with Falcon’s Fury, the first drop tower of its kind in the world. Additionally, with no connecting structures, it will be the tallest freestanding drop tower in North America.

No bird can match the speed of a falcon in its hunting dive. The falcon is the fastest animal on Earth, reaching speeds of 200 mph. Designers were inspired by this bird of prey during the development of the new attraction.

At the ride’s highest point Busch Gardens has added an element of surprise. Like its bird of prey namesake, riders will pivot 90 degrees in midair to a face-down dive position. An instant later they’ll plunge 60 mph at 3.5 Gs straight down with speed and power like they’ve likely never experienced before.

Construction in the Timbuktu area of the park has already begun, and Falcon’s Fury is scheduled for completion in spring 2014.

A video teasing the new attraction was also released as part of the announcement:

Following Sandstorm’s removal, work began on the foundation for Falcon’s Fury. This included driving 105 piles into the ground, some of them up to 205 feet deep. Those pilings were then topped with a five-foot thick concrete cap.

In mid-October 2013, the nine tower sections were delivered to a storage lot near the park, awaiting their eventual installation on site. The sections were each 20 feet in diameter, with the base featuring steel walls up to three and a half inches thick. From a press release issued on Oct 29, 2013:

In June, Busch Gardens Tampa announced that it would be taking thrills to new heights with Falcon’s Fury, North America’s tallest freestanding drop tower, in spring 2014. The construction has been underway ever since then, and the Busch Gardens design and engineering team is almost ready to start putting the pieces together.

While smaller components of the 335-foot drop tower have been arriving from several countries in Europe, including Slovakia, Switzerland and Germany, the cylinder sections arrived last week. The vertical tower is comprised of nine sections, each up to 20 feet in diameter and weighing up to 95 tons, or 190,000 pounds.

The total weight of the tower pieces that were delivered last week was approximately 519 tons, or more than 1 million pounds of steel. The pieces were shipped more than 4,700 nautical miles from the port of Tarragona, Spain and made the month-long trip across the Atlantic Ocean to the Port of Tampa. The ride pieces were then trucked to Busch Gardens over the course of two days, where they are waiting to be installed later this year.

Hornick explained in an interview that the sections would be installed overnight, as the Florida sun would actually bend the tower slightly and could cause issues with each piece fitting perfectly together. The goal as of mid-November 2013 was to have the main sections of the tower installed by New Year’s Eve, with work on stringing wires, hanging cables, and adding electrical sensors beginning in January. In that same interview, Hornick also revealed Falcon’s Fury would feature a random hold sequence, dangling riders face-down before they dropped from one to five seconds.

Around the New Year, the tower reached the 300-foot mark. A photo released by the park at that time showed three blue sections installed above the yellow sections. The 68-ton counterweight was installed inside the tower on January 22, 2014.

A hard hat tour was held for invited media outlets on Feb 5, 2014, where the park showed off the progress on Falcon’s Fury and Pantopia. 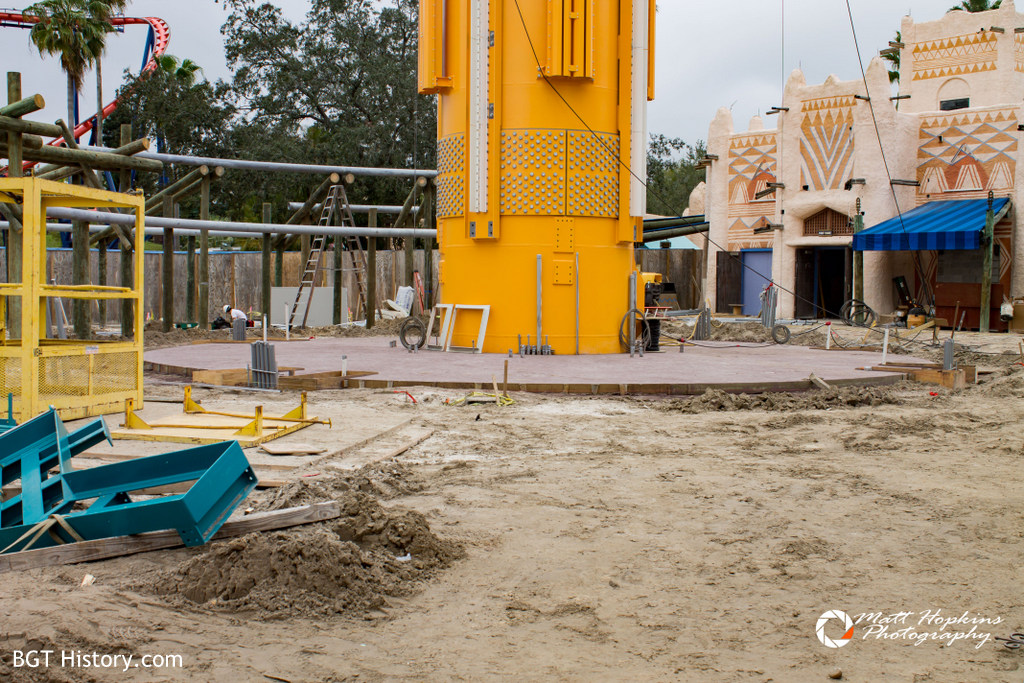 A look at the front of the media badge from that event: 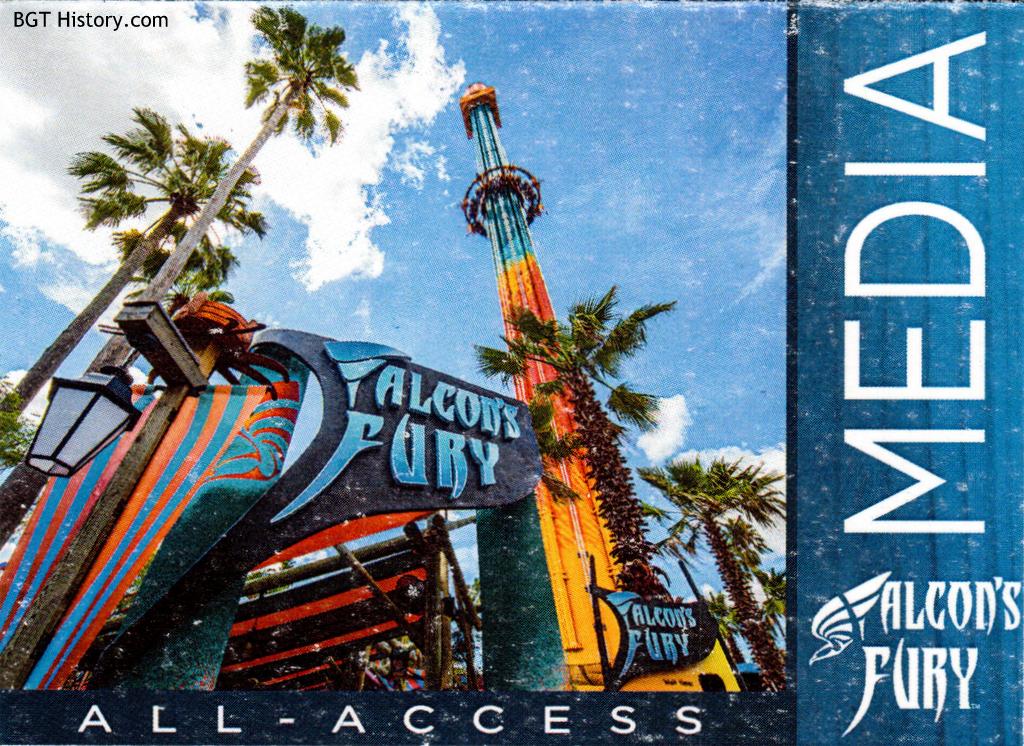 The park released a short video recapping the tour a couple of weeks later:

On February 19, 2014, the park released the second in a series of webisodes about Falcon’s Fury and the surrounding realm of Pantopia:

On February 28, 2014, the park announced Falcon’s Fury was scheduled to officially open to guests on May 1.

The park released the third webisode on March 25, 2014, which featured a look at what else was coming to the newly renovated Pantopia:

A contest was held from April 3 to April 7, 2014, on the park’s Facebook page where guests could enter to win one of 50 prizes for the First-to-Ride Sweepstakes. Each winner would have received two Falcon’s Fury First-to-Ride Party tickets for use on May 1, 2014, for the exclusive after-hours event. A second contest was held shortly after the first, ending on April 15, 2014, with 50 winners receiving their notification the following morning.

The afternoon of April 14, 2014, was another milestone in Falcon’s Fury construction – the first full-height test drop. Beginning at about 100 feet off the ground, a total of seven test drops were performed with the last being from the maximum height.

On April 18, 2014, the park announced the opening date for Falcon’s Fury would be postponed indefinitely due to construction delays. The pass member event originally scheduled for the first weekend in May was also postponed.

Busch Gardens’ new thrill ride Falcon’s Fury includes first-of-its kind design elements, systems and parts. Due to a delay in the fabrication of key component parts, neither the manufacturer nor Busch Gardens are able to complete the lengthy testing processes needed to open the ride to the public. The safety of our guests and team members remains Busch Gardens’ top priority and none of these delays involve safety systems. The ride has been safely operated in the initial stages of the testing process, and all other elements of the park’s newest re-imagined land Pantopia are now open to guests. Busch Gardens will provide updates on the ride opening as events warrant. We are committed to delivering world-class thrills and the best possible ride experience, and we look forward to the launch of Falcon’s Fury, North America’s tallest freestanding drop tower, later this summer.

On July 31, 2014, the park posted on its Twitter account that testing was underway for Falcon’s Fury. By the second week of August, employee testing was underway. On August 16, 2014, several members of The All-American Rejects, who were performing that evening as part of the Summer Nights concert series, were among the first public guests to ride.

The park released a short POV video on its YouTube account on August 19, 2014, showing the tilt of the seats at the top and the subsequent drop:

After several weeks of a successful soft open, Falcon’s Fury officially opened on September 2, 2014. From a press release issued by the park on that day announcing the ride was officially open:

“We know guests from around the world have been waiting to experience this one-of-a-kind thrill ride, and we are excited to officially invite those guests to ride Falcon’s Fury,” said Park President Jim Dean.

The park released an official POV video for Falcon’s Fury on September 4, 2014:

The park launched a social media campaign inviting guests who had experienced Falcon’s Fury during the soft open to share a selfie showing their reaction to the ride with #falconface. On September 16, 2014, the park released a short video showing some of the images shared:

By November, the park was offering a Falcon’s Fury GoPro Experience. A temporary booth was set up between Falcon’s Fury and Painted Camel Bazaar, and when operating guests could rent a GoPro and harness to capture their experience on the ride. The park provided the guest with a digital copy of the experience, along with an offer for $5 off any PhotoKey product and five free rings to play at Pantopia Ring Toss. The cost was $29.95.

In the spring of 2015, a short metal fence was added around the exterior of the landscaping beds surrounding Falcon’s Fury to help keep guests from trampling the foliage.

Thrill Factor, a series on Travel Channel, debuted on August 12, 2015. In that episode, hosts Kari Byron and Tory Belleci took on Falcon’s Fury and explained the science behind the ride and its appeal to adrenaline junkies.

A late August 2015 scheduled refurbishment was removed from the park’s calendar by the beginning of that month.

Falcon’s Fury was featured on an episode of Bert the Conqueror that debuted on Travel Channel on June 21, 2016.

In the summer of 2018, Falcon’s Fury went down for an unannounced refurbishment, from the beginning of July through August 18, reopening on August 19, 2018. While the park did not give details on the reason for the closure, several park ambassadors indicated to guests a lightning strike was the cause of the extended downtime.

In the summer of 2020, Falcon’s Fury won the 10Best Award for the Best Non-Roller Coaster ride in the country, as voted by USA Today readers in an online poll.

For Thanksgiving 2020, the park released an on-ride POV showing the sunset over Tampa:

Additional details and images on Falcon’s Fury will be added in the future.