The Asian Elephant habitat is located in the Nairobi section of the park and is visible along the pathway opposite the Animal Care Center. The five elephants residing there can also be seen from above while passing by on the Skyride.

There are currently five female Asian elephants on the habitat – Tina, Simba, Rosie, Carina, and Karnaudi. Karnaudi was born at Busch Gardens to her mother Carina.

In addition to the portion of the habitat seen from the main pathway, the elephants can enjoy another area further away from the path. That portion includes a large swimming pool, located on the backside of the area and viewable from the Skyride. The pool is large enough for the elephants to fully submerge themselves if they choose.

In the late spring of 2011, a new Elephant Interaction Area opened, which included a raised platform and ground-level plaza with an innovative husbandry gate. Also part of the upgrade was a new audio system for animal care staff to use when presenting to audiences. A 53-inch monitor was installed in the new area which was capable of displaying a live view of the habitat, a feed from a handheld camera used by animal care staff, or other videos on a loop including past training demonstrations and facts about elephants in the wild. Added after the initial debut of the area were graphic displays with information about each of the five elephants on habitat, including their unique personality traits.

Also part of the project was the addition of a new stairway for animal care staff to use to reach the walkway above the habitat adjacent to the new plaza and gate. At the time of opening the new interaction area, it was anticipated to be open three or more hours per day for both demonstrations and general viewing.

As of April 2012, the Elephant Interaction Area was open for demonstrations three times daily – 11:45 a.m., 2:30 p.m., and 5:30 p.m. Guests could see any number of behaviors the elephants were trained to exhibit, all done with positive reinforcement. The elephants always had the choice of whether or not to participate.

On April 13, 2013, the park celebrated Karnaudi’s 23rd birthday, which included special enrichment for all five elephants.

In a series of storms on May 2, 2014, rainfall caused flash flooding at several locations within the park, including the elephant habitat.

World Elephant Day on August 6, 2014, was celebrated with events both during the day for all guests and with a special upcharge evening event. The animal care team set up at the Animal Care Center from 9:30 a.m. to 5 p.m. that day with interactive displays and activities showing guests how they care for the elephants at the park. Guests also had the opportunity to help create enrichment activities for the animals. Complimentary tours of the elephants’ indoor housing, referred to as Pachyderm Palace, were also offered on a first-come, first-served basis. The 20-minute look behind the scenes was available for a total of 160 guests.

That evening from 7 to 9 p.m., guests could enjoy An Evening with the Elephants, which was an exclusive behind-the-scenes upcharge experience. It combined an up-close look at the elephants while enjoying appetizers and drinks with trainers sharing stories about caring for the pachyderms and elephant conservation in general. The event price was $69 per person, and pass member discounts did apply. The menu included fresh fruit, harvest salad, bruschetta, citrus slaw, scallops wrapped in bacon, chicken quesadillas, pulled pork empanadas, mini strawberry shortcakes, beer, wine, Coca-Cola products, and a “Pink Elephant” specialty drink. The event was limited to guests ages 13 and above and required Busch Gardens admission.

In January 2015, a new elephant was introduced to the herd. The park welcomed Ganesh, better known as Spike, a 33-year-old male Asian elephant weighing in at more than 12,000 pounds, making him the largest animal at Busch Gardens Tampa upon his arrival. Spike was relocated from the Calgary Zoo in 2014 and had been residing behind the scenes while modifications were made to the habitat to accommodate his large size.

Along with serving as an ambassador of his species, the goal was also to have Spike play an essential role in Busch Gardens’ conservation efforts, as part of the Association of Zoos and Aquariums (AZA) Species Survival Plan (SSP) for sustaining the critically endangered species.

“Busch Gardens is a leader in the care of pachyderms, and over the past several years, we have made great strides in developing industry-leading positive reinforcement training methods and a respected behavioral management philosophy for these magnificent animals,” Busch Gardens Park President Jim Dean said in a press release announcing Spike’s arrival to the habitat.

On January 16, 2015, Busch Gardens posted on Twitter that Tina, one of the five female elephants, was doing fine and was expected to return to the habitat soon. This was likely after some natural behavior between the elephants with the introduction of Spike to the habitat and the herd adjusting to his presence.

A rumor circulating in February 2017 that the elephants were set to be removed from the park was denied by a spokesperson who replied to an inquiry stating simply they were “not being removed.” There was reportedly some concern over Spike not breeding as was hoped for when he was moved to the park.

As part of Easter Celebration week, on April 17 & 18, 2019, an Elephant Easter Egg Hunt was held at the habitat, with keepers setting up specially themed enrichment including paper-mâché “eggs” filled with the herd’s favorite snacks.

In honor of 813 Day on August 13, 2020, a specially themed enrichment session was held on habitat for the elephants. 813 Day celebrates the Tampa area code 813.

The elephants received some specially-themed enrichment to celebrate Valentine’s Day in 2021.

More special enrichment was available for the elephants on Easter Sunday, April 4, 2021. 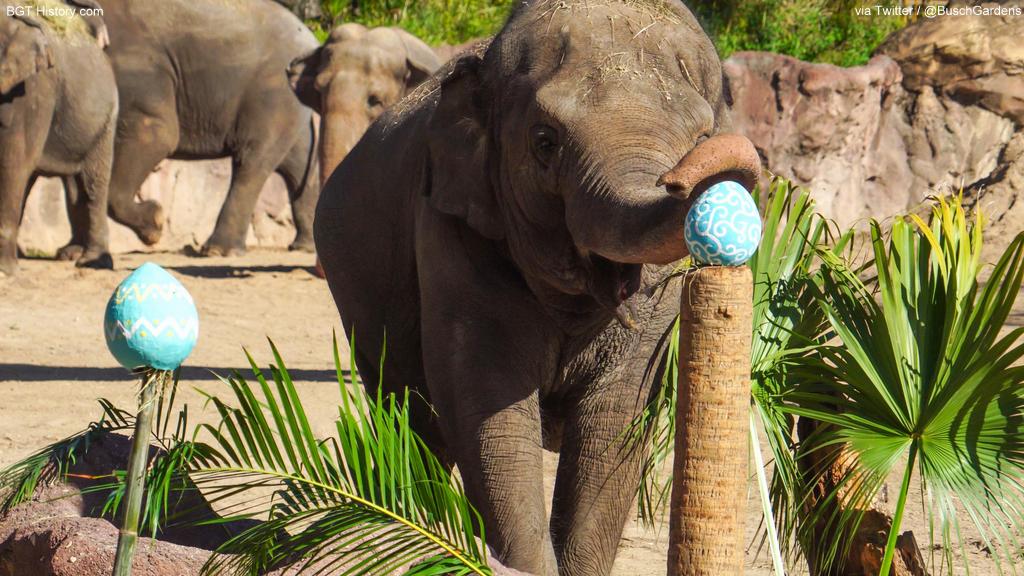 Additional details on the Asian elephants will be added in the future.